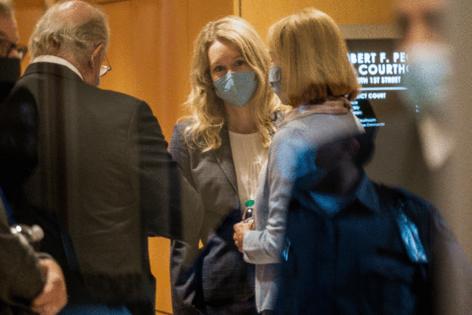 Separated by 10 feet and a see-through anti-COVID barrier, Elizabeth Holmes faced off against federal prosecutor Robert Leach for six hours Tuesday, as Leach sought to highlight her alleged lies about the failed blood testing startup, and emphasize her decision-making role at the firm — while also showcasing the apparent affection between Holmes and the former company president she yesterday accused of sexually abusing and controlling her.

Taking the witness stand for the fifth day, Holmes was at times gruff, the frequent small smiles she gave while answering her own lawyers’ largely absent as she fought back against allegations that she deceived investors, retaliated against whistleblowers, and controlled her purported abuser and ex-lover, rather than the other way around.

The testimony followed stunning claims Holmes made Monday accusing former Theranos president Sunny Balwani, with whom she had an intimate relationship for more than a decade, of forcing sex on her when she displeased him, as well as controlling how she worked, her hours and even what she ate. The testimony — coupled with pre-trial filings from Holmes’ attorneys — suggested that Holmes may cite Balwani’s alleged emotional and physical abuse as part of their defense.

Under cross-examination, Holmes became emotional when reading loving messages she exchanged with Balwani, who is also charged with fraud in relation to his work at Theranos and will be tried next year. She wiped away tears as she read aloud the words Balwani had sent. “U r God’s tigress and warrior,” and her own response: “Coming from my tiger, means the whole universe to me.”

In more than 12,000 messages over five years, Leach asked Holmes, “do you know how many times the word ‘love’ appears? Would it surprise you to know more than 594 times?” Holmes, with a sad smile, said no.

Holmes, who founded Theranos at age 19 in 2003, is charged with allegedly bilking investors out of hundreds of millions of dollars and defrauding patients with false claims that the company’s machines could conduct a full range of tests using just a few drops of blood, when she knew the technology had serious accuracy problems. She and Balwani have denied the allegations.

Leach, in presenting to the jury the messages between Holmes and Balwani, also emphasized that Balwani repeatedly informed Holmes about problems in the Theranos lab. “He’s not hiding anything from you?” Leach said. “No,” Holmes answered. She acknowledged that Balwani reported to her. Asked whether she at times gave direction to him, she said, “I’m sure.” Asked if there were times she “told him what to do,” she said, “I’m sure there could have been.”

Holmes did manage to turn the tables on Leach, after her he asked her to read a 2014 exchange between her and Balwani that included Holmes asking him if he would be “OK if I saw Jesse and Laura separately in the AM tomorrow?” Leach asked Holmes if this exchange was another example of Balwani being loving.”I think it’s me asking him for permission to see my friends,” she countered.

The prosecutor also elicited an admission from Holmes that she fired Balwani, whom she claims ran Theranos’ laboratory business operations, in 2016, with the support of the. And though she testified Monday that a federal regulator’s finding of dangerous deficiencies in Theranos’ lab opened her eyes to Balwani’s failures as the company’s president and led to the end of their relationship, she admitted to Leach that she did not mention that as a reason for the breakup when asked by federal investigators.

Reinforcing his argument that Holmes was ultimately responsible for everything that happened at Theranos, Leach got Holmes to acknowledge that she could have fired lab officials or board members, and that her ownership of most of the firm’s shares meant she could outvote anyone on the board. “The buck stops with you,” Leach asserted. She responded, “I felt that.”

Leach also struck a deep blow after playing for the jury a clip from a television interview Holmes did in 2015, in which the startup founder — clad in a Steve Jobs-style black turtleneck — declared that “Every test that we can offer in our laboratory can run on our proprietary devices.” Under questioning, Holmes admitted that the majority of Theranos’ patient testing had been done on other companies’ machines and that her company’s analyzer could only run a dozen types of test.

When asked about her behavior in advance of a bombshell expose from Wall Street Journal reporter John Carreyrou, Holmes disputed Leach’s characterizations, saying that she was only seeking to protect “trade secrets” from being disclosed when she emailed the newspaper’s owner Rupert Murdoch in what Leach described as a attempt to “quash” the story.

And after admitting last week that she had pilfered the logos of pharmaceutical giants Pfizer and Schering-Plough and put them on glowing Theranos reports sent to investors and others, Holmes testified Tuesday that she had also removed from the purported Pfizer report that it had been prepared by Theranos for Pfizer, leaving the words, “Pfizer, Inc.” in the space for the name of the report’s creator.

Asked about information she withheld from Theranos board members about use of other companies’ machines for blood testing, Holmes responded, “There are many things I wish I did differently.”