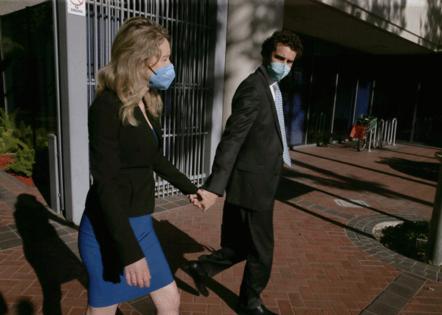 In a damning morning of testimony Friday, jurors in Elizabeth Holmes’ criminal fraud trial heard that Theranos used the Pfizer logo and claimed the pharmaceutical giant had validated its technology in 2010, while a former Pfizer scientist testified that he had dismissed the blood-testing technology two years earlier and knew of no one at Pfizer who approved the logo’s use.

Scientist Shane Weber had been tasked with a final review for Pfizer to determine if the company would work with Theranos, he testified in U.S. District Court in San Jose. The project included a conference call with Holmes and other Theranos representatives in which she did all the talking, Weber testified.

In his final report to Pfizer he referred to the call, saying Holmes had “provided oblique, deflective or evasive non-informative answers” to technical questions.

Of his entire probe into Theranos’ technology and the information it had given to Pfizer, Weber wrote in his final report that “Theranos unconvincingly argues the case for having accomplished tasks of interest to Pfizer,” and that, “the nine conclusions in their summary document are not believable based on the information provided.”

He recommended that Pfizer not invest money or resources into working with Theranos, but left the matter open to revisit in case Pfizer’s needs changed or Theranos’ technology improved, according to his report and testimony.

He talked by phone with Holmes to explain his findings, and told his bosses they had agreed to get in touch every six months, according to an email shown to jurors. “She asked for other names at Pfizer to approach and I politely deflected,” he said in the email. Asked by the prosecution why he deflected, Weber testified that he “did not want multiple other points of the company being contacted and being distracted from their clinical trial duties.”

Weber, a gray-haired man in a gray pinstriped suit, white shirt and striped tie who was laid off from Pfizer in 2014, was shown a version of a Theranos report — that he had dismissed — that had the Pfizer and Theranos logos on it, and that Holmes had emailed in 2010 to Walgreens executives when Theranos was trying to get its machines into the drugstore chain’s stores.

The dual-logo report claimed that Theranos technology had “superior performance” with “excellent” accuracy.

Holmes, who founded the Palo Alto blood-testing startup in 2003 at age 19, is charged with allegedly bilking investors out of hundreds of millions of dollars, and defrauding doctors and patients with false claims that the company’s machines could conduct a full range of tests using just a few drops of blood. She and her co-accused, former Theranos president Sunny Balwani, have denied the allegations.

Weber said he had not approved Theranos’ use of Pfizer’s logo, and was not aware of anyone at Pfizer who had.

Under cross-examination Friday afternoon by Holmes lawyer John Cline, Weber acknowledged that he had told the prosecution in a pre-trial meeting that the test types Theranos had been promoting to Pfizer were very different from what Pfizer was seeking, and that his report to Pfizer was never sent to Holmes.

Also on Friday morning, Judge Edward Davila excused Juror No. 5 — the third juror to leave so far — for undisclosed reasons. One juror has been released over financial concerns, and another over her assertions that her Buddhist religion conflicted with the possibility of sending Holmes to prison. Juror No. 5 has been replaced with Alternate Juror No. 3. Only two alternates remain.

Holmes faces maximum penalties of 20 years in prison and a $2.75 million fine if convicted, plus possible restitution, the Department of Justice has said.