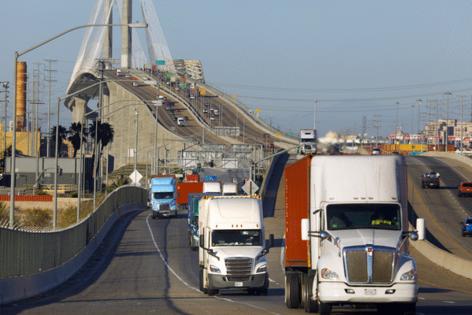 One of the world's largest trucking companies, XPO Logistics, agreed Tuesday to pay $30 million to settle class-action lawsuits filed by hundreds of drivers who said they earned less than minimum wage delivering goods for major retailers from the ports of Los Angeles and Long Beach.

The settlements amounted to a major victory for the International Brotherhood of Teamsters, which applauded the lawsuits as part of a decades-long effort to organize the twin ports' more than 25,000 drivers.

Trucking companies classify many of their drivers as independent contractors, thus making them ineligible for a host of labor protections, including the ability to collectively bargain for wages.

In recent years, California's Labor Commissioner has awarded more than $50 million to some 500 truckers who claimed they were deprived of wages through misclassification as contractors rather than employees. At the same time, many truckers have shied away from working as employees, preferring to own and operate their own vehicles.

But as the pandemic has driven supply chain snarls, port drivers have voiced growing frustration at a loss of income as they wait in hours-long lines at the ports — time for which they would be compensated if they were employees.

The settlements do not require XPO to reclassify its drivers as employees, but labor leaders nonetheless hailed the agreements, which will compensate 784 drivers, as a turning point in the fight over port drayage. The settlements are preliminary, but individual drivers could receive as much as $100,000, depending on how long they worked for the company.

"Misclassification of workers is all too common in the ports," Ron Herrera, president of the Los Angeles County Federation of Labor, said in a statement. "While XPO is notorious, there are far too many employers still cheating workers out of the pay and the rights they deserve."

A spokesman at the company's Greenwich, Conn., headquarters declined to elaborate on XPO's decision beyond an official statement: "With the legal and regulatory landscape in California evolving, we reached a settlement on terms that are favorable for XPO and should put this matter behind us."

The reference to California's "legal and regulatory landscape" alluded to a 2018 law, Senate Bill 1402, which makes logistics companies' customers — including major retailers such as Amazon, Walmart, Target, Apple, Ikea and Toyota — jointly liable for wage violations if their contractors have unsatisfied final judgments.