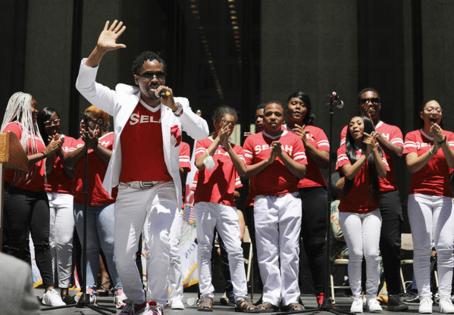 President Joe Biden on Thursday signed a bill that makes Juneteenth a federal holiday, meaning most federal employees get a paid day off Friday.

So will employees in Cook County and Illinois government offices. But the U.S. Postal Service will deliver mail Friday and Saturday; it said it was not possible to cease operations on short notice.

But what if you don’t work for the government? What are the chances you’re going to get a paid day off without losing one of the ones you already have?

The day — June 19 — commemorates the day in 1865 that Union troops arrived in Galveston, Texas, and informed the last enslaved Black Americans that the Civil War had ended and they were free. Like other federal holidays, if the day lands on a weekend, it is observed on either Friday or Monday.

Illinois Gov. J.B Pritzker signed a bill Thursday to make Juneteenth a state holiday, beginning next year, but announced state offices would be closed Friday after Biden’s action. In December, Cook County made Juneteenth one of 14 government holidays, so county employees have Friday off.

Some companies already made the call to formally observe it.

Last year, Allstate turned Juneteenth into an annual paid holiday for employees. So did Target, which closed its Minneapolis headquarters for the day and said hourly employees who work in stores and distribution centers that day would be paid time and a half. JPMorgan Chase closed its branches early on June 19 while paying employees for a full day.

On Thursday, JPMorgan Chase said it will recognize the new federal holiday this year by giving all U.S.-based employees one floating day off. Next year, Juneteenth will move into the regular holiday schedule.

Private-sector employers don’t always follow the federal government’s lead. A survey of employers by Mercer found that 9% of respondents observe Juneteeth, the same percentage as those closing for Columbus Day/Indigenous Peoples Day and less than the 13% who observe Veterans Day. On average, employers who responded to the survey offer an average of nine fixed holidays annually.

With Juneteenth, Rich Fuerstenberg, a senior partner in Mercer’s health practice, expects organizations to consider their options pretty quickly. Those include replacing an existing paid day off with Juneteenth; adding another holiday; or adding Juneteenth while taking away one of the floating days off many organizations offer to workers.

“You’ll see a lot of employers just add it,” he said.

Observing it, where possible, dovetails with a new focus on diversity, equity and inclusion initiatives in organizations of all sizes. But it can’t stand on its own, Fuerstenberg said.

“An employer who is not doing anything in that space, who observes Juneteenth, checks the box and moves on, that’s not enough,” he said. “Juneteenth is a good first step on that journey.”