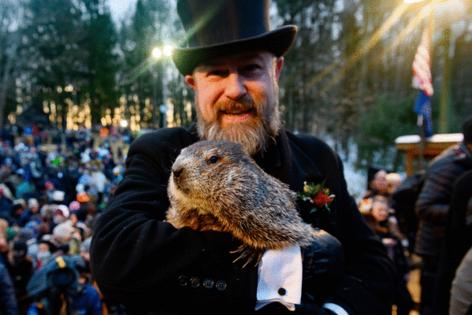 Before the movie “Groundhog Day” became a box office hit, Feb. 2 had nothing to do with a time loop that imprisons its temporal captives until they do what eternity intends. Since 1887, that day had been all about predicting the first day of spring.

But even Punxsutawney Phil is just a meteorologically inclined caricature misrepresenting the unseen world of a biological marvel: the whistle pig.

Also known for that tongue twister about tossing wood, French Canadians refer to Marmota monax as “siffleux” (whistle), the sound it makes when sensing danger.

The groundhog is one of nature’s habitat engineers — an adaptive rodent that influences land-based ecosystems throughout eastern United States, Canada and Alaska. Before European colonists cut trees to clear farmland, groundhogs were creatures of woodland edges where they could rapidly climb trees to escape predators. They can still climb, but are more often seen alone in low-cut fields casually munching ground-level foliage.

“They have a thumb-like appendage that helps them to climb,” said Henry Kacprzyk, a biologist at the Pittsburgh Zoo and Aquarium in Highland Park. “But they really have no way of foretelling the end of winter.”

With the exception of “that one they grab and pull up from its den in February,” he said, groundhogs are true hibernators. They would rather sleep through winter than prognosticate.

“Down in their burrows, their body temperature drops to 40-45 degrees and they survive on the fat their body stores,” he said. “When the ground around them warms during the longer days of spring, the first thing they do, even before eating, is come out and look for a mate.”

Unlike prairie dogs and other members of the marmot family that gather in close-knit socially complicated colonies, groundhogs live most of their lives alone.

The newly chosen chief executive of Pheasants Forever says she will strive to broaden the organization's membership base and diversify its funding sources as she takes over one of the nation's most successful wildlife ...Read More

Three years ago almost to the day, Arik Matson cut short his dinner at a Waseca restaurant and sped in his police cruiser to a changed life.

A call had come in about a backyard prowler with a flashlight, and Arik, then 31...Read More