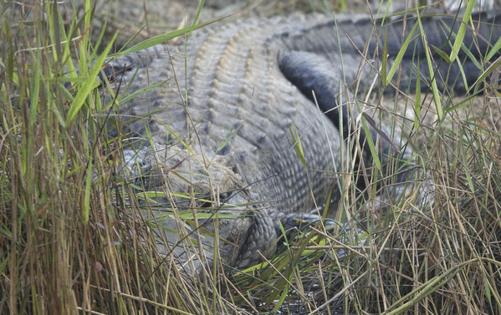 Jamie and Karyn Dobson, who recently moved to the Sunshine State from Chicago, heard an alarming noise that sounded like a car crash, they told Wink News.

Upon further investigation, they encountered a large alligator in their garage. The door had been left open, they said, and it ambled on in.

The 8-footer wasn’t just chillaxing or looking for a mate, though. During its time in the garage, the alligator encountered some cases of Diet Coke and handily attacked them.

Karyn Dobson said they had a bunch of soda stored in the garage for her upcoming birthday party.

“Diet Coke was spewing everywhere,” she said, nervously laughing. “It tore open the box, had a few cans.”

Video provided to Wink shows the animal hissing and backing into a corner, looking ready to pounce, as a local trapper arrives at the messy, can-strewn scene.

The gator was reportedly relocated, and the party guests likely had to mix their cocktail with a different diet beverage.

Florida residents need to be mindful that alligator mating season is in full swing, and they’re out there on the hunt. Keep all your doors closed.

I've owned various garages over the years that held various boats, but none of these structures was more hallowed than the first, a poor lighted edifice that featured the usual vestiges of workshop disarray: A broom in one...Read More