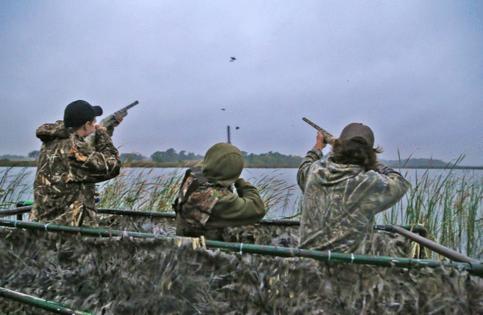 But one sentence sums up the type of person who shows up on opening day of a Minnesota duck season even when the odds of bagging a limit of birds are akin to those of rolling snake eyes on a craps table.

Without thought of background, position or economic status, the duck hunter likes people who hunt ducks two months a year and talk about it the rest of the time.

So it was here Saturday when a group of otherwise civic-minded Minnesotans focused their efforts solely on ducks and duck hunting. The former are the birds themselves, mallards, teal, ringnecks and the others. The latter, duck hunting, is far more encompassing and includes everything from campfire vigils to wet dogs leaping onto saggy beds and hot gun barrels on frigid mornings.

In the still-dark of the season's first day my pal Norb Berg emerged from the hunting shack's bunkhouse no more bleary-eyed than its other inhabitants. Norb says he's 90 years old. But without notarized documentation his age claim should be considered a possible marketing ploy intended to win him placement in the best blind on the pass.

Others in attendance Saturday morning were three of Norb's four sons, Mitch, Tony and Paul, as well as Kent Harris, Matt Slater and Tom Larson. Also present were Labrador retrievers in such number the quaint bungalow could have been confused with a kennel. Two of the canines had the same name, Ruby, and the handles of the others ran the alphabetical gamut, from Chance to Gypsy to Walter.

Shooting light was still a half-hour away, and camouflage pants and shirts were being belted and buttoned.

Friday morning in this part of the state a cold front had whistled though, accompanied by rain and a brisk westerly wind. The sky had subsequently cleared but the wind remained, and with it the hope a few birds had blown in from parts unknown. Contrary to popular belief, ducks are not put to wing by rain. Rather, wind is what motivates them, and under the best circumstances, lights their afterburners, increasing their speed and making for sporting shooting.

Advancing the rising sun, shards of saffron and cinnamon, ochre and scarlet bruised the horizon, illuminating our positions along a pass that divided a small lake from an even smaller marsh. Canada geese honked in the middle distance and scaup or other diving ducks paddling in the shallower water low-barked their oddly syncopated brrr, brrr.