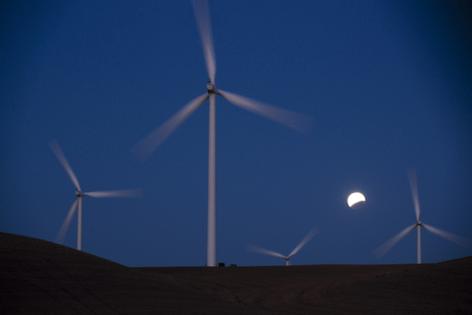 Intent on keeping the two apart, a team of University of Minnesota researchers with expertise in wildlife behavior, neuroscience and mechanical engineering is continuing its work to find solutions through what bald and golden eagles hear and how it affects their behavior. The findings might help create acoustic deterrents at wind farms that could save the raptors from injury or death as they fly in the airspace near the gargantuan structures.

The group's initial research in 2017-2018, funded by the Department of Energy, included The Raptor Center, St. Anthony Falls Laboratory and experts in hearing sciences. The work was lab-intensive and involved measuring the response of eagles and red-tailed hawks, while sedated, to natural and artificial sounds. The new work will take those findings outdoors to monitor the behavior of bald and golden eagles during flighted tests, among other experiments.

Paid for by a $261,000 grant recommended by the Legislative-Citizens Commission on Minnesota Resources, the next phase is well-timed.

Amid the drive for more renewable energy (wind accounted for 3% of the U.S. energy used in 2020), wind turbines stand to increase in size and number across southwestern Minnesota and the Dakotas. Some will be the equivalent of 60-story structures.

What's unknown and appears difficult to quantify after years of studies are the species most at risk and the number of birds killed by hitting wind turbines. The American Bird Conservancy estimates more than a half-million birds are killed annually, based on three separate studies published in 2013 and 2014. By comparison, it's estimated that about 600,000 birds are killed a year from striking windows.

One of the researchers is Julia Ponder, a professor in the College of Veterinary Population Medicine and former director of The Raptor Center, whose birds were part of the initial research. She acknowledged the challenge of collecting solid data about the mortality of eagles owing to wind farms and the effectiveness of current deterrents but said the search for solutions is important.

The search also is necessary. Although eagles are no longer an endangered species, they are protected by several federal laws, including the Bald and Golden Eagle Protection Act.

Currently, some wind farms use mechanical detection to lessen their impact on wildlife. Some operators employ radar or have workers scan the skies, and shut down the turbines when they anticipate migratory birds or others moving through. Acoustic deterrents already are used in places, such as one called DTBird in parts of Europe and whose effectiveness still is being studied.

Ponder said the work on eagles could ultimately help other species.