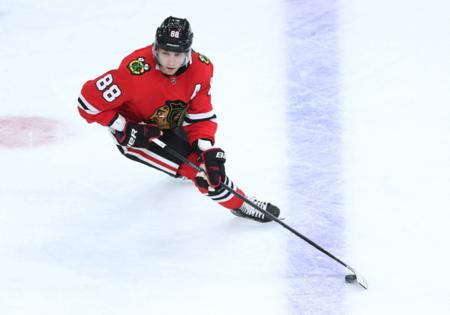 Toronto Maple Leafs forward Auston Matthews is the third, and the rest of the 25-man team is expected to be revealed in January.

“It was a surprise this morning, I didn’t know that this was happening,” said Jones, who joined the Hawks this summer via a trade with the Columbus Blue Jackets. “Obviously there are so many good USA defensemen right now that I knew I had to come in and have a good start to the year, which I still do (have to) obviously.

“It’s no secret we’re excited about the prospects of our team for the 2022 Games,” Bowman said in a statement. “Patrick, Auston and Seth reflect the high level of talent that will make up our final roster as we strive to bring gold back home to the U.S.”

It has been widely speculated that Alex DeBrincat will make the roster.

“I have no doubt that Alex has great chance of making it and being on the team as well,” Jones said. “It’s awesome that we’ve shared this experience together and gained some chemistry this year.

“If we’re on the ice at the same time at the Olympics it’s going to be a whole lot easier to read off each other.”

For Kane, it will be his third Olympics. The right winger won a silver medal in 2010, losing to Hawks teammate Jonathan Toews’ Canadian team in Vancouver, and his 2014 team finished fourth in Sochi.

Kane wasn’t available to speak with the media Thursday.

“I think we have a great shot,” Jones said. “It’s probably the best team we’ve had in a while, and with the talent we have up front and the talent we have on the back end, we have some options in net, it’s going to be a lot of fun.”