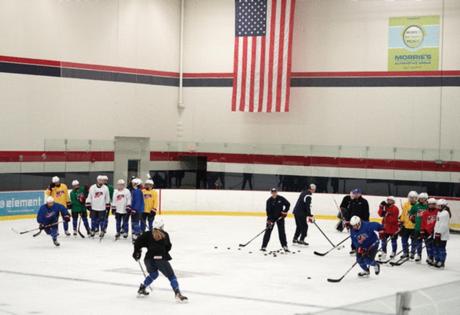 BLAINE, Minn. — The commute can't be beat. It takes Maddie Rooney only eight minutes to drive from her home to the Super Rink in Blaine, where the former Minnesota Duluth goalie and her U.S. women's hockey teammates will train for the next four months as they prepare for the Winter Olympics.

A native of Andover, Rooney already knew her way around the Super Rink, where she took skating lessons as a kid. She felt even more comfortable Tuesday, when the U.S. women's national team officially began its pre-Olympic residency program. With new signage and a locker room designed just for them, Rink 6 has been turned into a true home base for the 28 players training toward the Beijing Games in February.

"This is going to be a great setup for us,'' said Rooney, who helped the U.S. win gold at the 2018 Olympics. "We feel welcomed and valued here. And that's so important when you're working toward a goal like this.''

The work started in earnest Tuesday, as the residency program returned to Blaine for the first time in more than a decade. Though players from 13 states are part of the program, it has a pronounced Minnesota flavor.

The group includes six Minnesotans and eight current or former Gophers. Minnesota State, Mankato senior defenseman Anna Wilgren was added last week. The group will be cut to 23 for the Olympics, with the Winter Games roster expected to be announced Jan. 1 during the NHL Winter Classic at Target Field.

In addition to training six days a week, the team will play nine games against archrival Canada, called the "My Why Tour.'' The series, which includes a Dec. 20 game at Xcel Energy Center, kicks off Oct. 22 in Allentown, Pa.

The U.S. team also has scheduled several scrimmages with North American Hockey League teams, local boys' high-performance and elite league teams, and a group of top women's players who are not training with the national team.

Like Rooney, USA Hockey is plenty familiar with the Super Rink. Before the 2010 Vancouver Olympics, it held its first-ever women's pre-Olympic residency at the facility, bringing players from all over the country to live and train in Blaine. The locker room was built specifically for the U.S. women's team with $350,000 in donated funds.

USA Hockey moved the program to Boston for the 2014 Sochi Games and to the Tampa, Fla., area for the 2018 Pyeongchang Olympics. Katie Million, hired in 2019 as director of USA Hockey's women's national teams, didn't know the history in Blaine when she came on board. Once she learned about it, she knew she wanted the program to return — perhaps permanently.

"When I came and saw it, I said, 'Why are we not using this space? It's fabulous,' '' said Million, who is based in Minneapolis. "It just made a lot of sense. We really would like to keep it home.''

In addition to the locker room, which has been renovated, Million cited the abundance of high-level local competition and Blaine's central location as factors in the decision to return. Several players already were living in the Twin Cities. So was Joel Johnson, coach of the U.S. women's national program.

Johnson, the longtime associate head coach for the Gophers women, was hired last summer to coach the St. Thomas women's team, about six weeks before he was named the Olympic coach. Having the national team in Blaine will allow him to juggle both jobs. Johnson plans to be behind the Tommies bench whenever possible, with St. Thomas assistant Bethany Brausen assuming head coaching duties when Johnson is busy with the national team.

"I'm here in the morning, then I grab lunch and head down and continue to coach at St. Thomas in the afternoon,'' said Johnson, who coached the U.S. women to a silver medal at the world championships in August. "It's pretty seamless.''

Johnson said the team has everything it needs at the Super Rink, a sentiment shared by his players.

"The locker room, the signs, all the red, white and blue, it makes us feel at home,'' said forward Abbey Murphy, who is taking this season off from the Gophers to train with the national team. "It's awesome.''

The Afton native said she never looks at ...Read More