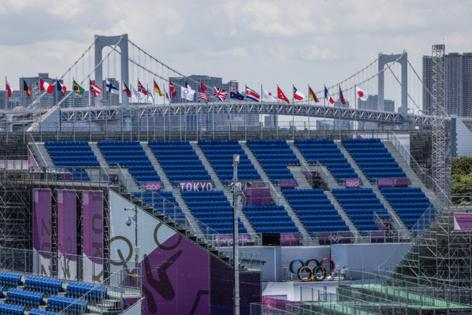 TOKYO — Thomas Gilman wanted nothing more than to go to Japan this summer, to wrestle for the U.S. team at the Tokyo Olympics. He was much less certain about whether Japan wanted him to come.

The Iowa native had read countless reports describing the country as a reluctant host for the pandemic-delayed Summer Games. Public opinion polls showed a majority of citizens favoring another postponement, or even cancellation. Anti-Olympics activists had staged small demonstrations and circulated petitions denouncing the Games.

On the bus ride to a Tuesday practice in Nakatsugawa, a town outside Tokyo where the team is training before the Games, Gilman found out what the residents thought. It wasn't what he expected.

"The streets were lined with people, waving the American flag,'' Gilman said. "They were cheering us on. They had signs with words of encouragement, words of love.

"It was almost emotional. If you just watched the news, you would think they wouldn't want us here. But they wanted to welcome us and help us out.''

The Olympics started late Tuesday night with softball games and soccer matches, played in empty stadiums. The curtain officially goes up at Friday's Opening Ceremony, where the usual pageantry, parades and fireworks will go on despite the circumstances. With Tokyo under its fourth pandemic-related state of emergency, organizers said Thursday that only about 950 people will be allowed inside National Stadium to see the show in person. Changes were still being made in recent days to a ceremony that has been plagued by scandals. This week the creative director and a composer were forced out of the production after inappropriate behavior from the 1990s came to light.

A poll this week by The Asahi Shimbun newspaper showed 55% of Japanese still are opposed to holding the Olympics. Despite those reservations, many seem determined to meet the moment with hospitality and grace.

Hundreds of workers have greeted travelers at the airport, cheerfully helping them through the complicated process of entering a country experiencing another COVID-19 surge. Olympic sites teem with volunteers — easily identified by their blue-and-white uniforms—rushing to assist any confused visitor.

The pandemic still hovers over these Olympics, as it has since the March 2020 decision to put the Games on hold for a year. The 1,979 cases of COVID-19 reported Thursday in Tokyo were the most in six months, and 91 people with Olympic accreditation have tested positive for COVID-19 since arriving in Japan.

That made for a much more subdued atmosphere than usual on the day before the Opening Ceremony. Many athletes didn't seem to mind, given what it took just to get to the starting line.