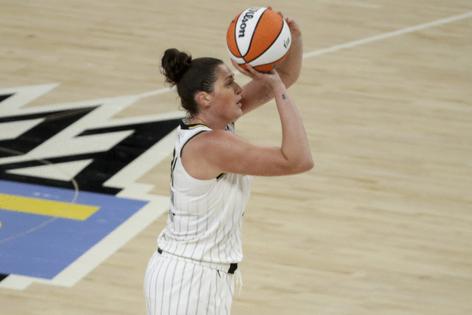 CHICAGO — When Stefanie Dolson considered what it will be like to be a member of the U.S. team in the first 3x3 basketball Olympic competition, she eventually expressed her excitement.

But first the Chicago Sky center acknowledged the expectation.

“That just adds more pressure, honestly,” Dolson said. “I just hope we can perform well and get the gold, because anything else…”

Anything else is not what’s expected of a USA Basketball team — even in an event in its early stages.

Dolson, however, is in a good place mentally and physically to help lead the U.S. team with Dallas Wings guard Allisha Gray and guards Kelsey Plum and Jackie Young of the Las Vegas Aces. Seattle Storm guard/forward Katie Lou Samuelson made the team, but tested positive for COVID-19 on July 19 and was replaced by Young.

Her offseason work helped her make a confidence-building turnaround from a disappointing 2020 season in the WNBA bubble, so much so that U.S. women’s 3x3 coach Kara Lawson said Dolson’s improvement has changed their team.

“It’s changed how much of a weapon she is for us out on the court,” Lawson said in a video conference call last week before the team opened training camp in Las Vegas. “She’s obviously 6-5 and is a dominant presence, but she moves much better. She can guard guards in 3x3 for us. She didn’t have that ability a year ago. She has much better endurance, so she has more in the tank at the end of games and at the end of tournaments.”

Lawson said the goal is to play 10 games in five days in Tokyo, starting with their opener against France in pool play Saturday. That frantic journey toward a medal — the United States’ only shot at one in the event since the men’s team didn’t qualify for the Olympics — is going to take all four players to be ready at all times.

Because a bad 10 minutes can doom their chances.

The New York Christ the King alumna was selected by her fellow Team USA athletes as a co-flag bearer for the Olympic opening ceremony in Tokyo, which will...Read More

The people of Japan don't want the Olympic Games, which are scheduled to start Friday in Tokyo after being postponed in 2020 by COVID-19. One poll said 80% are against it. Another said the opposition is 55%. Regardless, it...Read More

TOKYO — Vlatko Andonovski coached the women's national soccer team for 21 months and 24 games before experiencing what he experienced Wednesday.

And not just any loss, because the 3-0 defeat to Sweden in the ...Read More

The Olympics are going down under.

The 2032 Summer Games will be held in Brisbane, Australia, the International Olympics Committee announced Wednesday, two days before this year’s Opening Ceremony.

After Kate Grace failed to make the Olympic track team last month, she didn’t have time to feel bad for herself, or at least not right away. About 20 minutes after finishing a disappointing seventh in the women’s 800 ...Read More