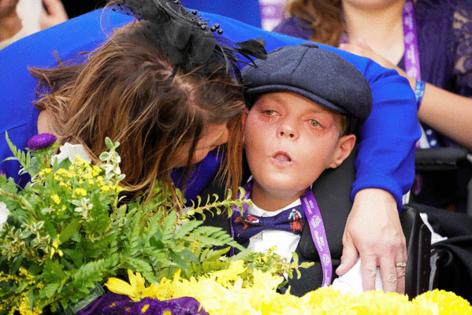 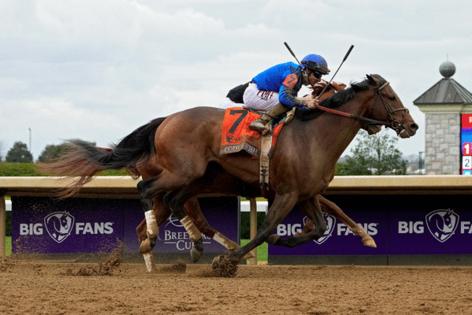 LEXINGTON, Ky. — Cody’s Wish was the prohibitive betting favorite, but an even stronger sentimental one on the second day of the 39th Breeders’ Cup World Championships at Keeneland. The son of Curlin fended off Cyberknife, a Kentucky Derby runner in May, to take the $1 million Dirt Mile.

His namesake, a teenager named Cody Dorman, was born with Wolf-Hirschhorn syndrome, a rare chromosomal disorder that affects many parts of the body. Dorman is unable to walk or speak verbally, but is able to communicate via a tablet. He befriended the horse that would later bear his name as a foal four years ago.

“He found me, and he hasn’t forgotten me,” Dorman said in a pre-race segment produced by NBC Sports. “He has always looked for me, and we have the same heart and the same drive. We never give up.”

It was trainer William Mott’s 11th Breeders’ Cup win and his first in the Dirt Mile. It was the first win for rider Junior Alvarado.

“(The) first time I got to meet him was at Churchill when I won with him, and I remember going into the winner’s circle and all he wanted to do was walk forward to where Cody was,” said Alvarado. “We tried to get the winner’s circle photo and he was getting upset until Cody got into the photo. They have an unbelievable bond.”

Elite Power rallied past the leaders to win the Breeders’ Cup Sprint by more than a length.

For the second time in the last three years, Irad Ortiz Jr. rode the victor. Ortiz was atop Whitmore when he won the $2 million Sprint in front of a pandemic-restricted crowd at Keeneland in 2020. This go-around, he won for Juddmonte and trainer William Mott, who picked up his second win in this year’s event.

Ortiz, who rode Goodnight Olive to a win in the Filly and Mare Sprint to start Saturday’s Breeders’ Cup card, won his 17th race in the World Championships. His wins put him in sole possession of third place among jockeys in career Breeders’ Cup victories.