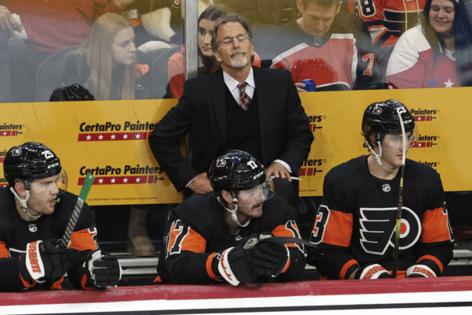 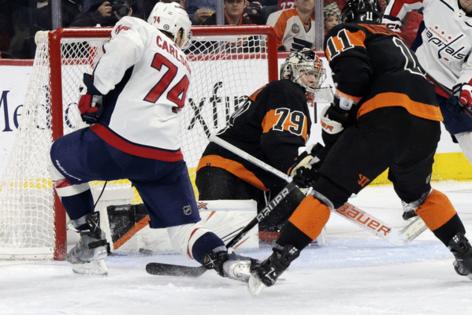 After going into the final frame tied, 1-1, with the Washington Capitals on Wednesday night at the Wells Fargo Center, the Flyers turned the puck over at the defensive blue line with just nine minutes remaining in the game. The turnover kept the momentum in the hands of the Capitals, as center Dylan Strome deflected defenseman John Carlson’s shot past goalie Carter Hart for the game-winner in a 4-1 Capitals win.

The Flyers went on a power play with roughly eight minutes remaining in the third period with a chance to tie the game. Center Morgan Frost set up forward Kevin Hayes on Capitals goalie Charlie Lindgren’s doorstep, but Lindgren made the sprawling pad save to presesrve the Capitals’ lead.

Coach John Tortorella opted to pull goalie Carter Hart with roughly two minutes remaining in the third period for the extra skater. However, they couldn’t pull together their attack, as Capitals captain Alex Ovechkin scored the empty-net goal just 30 seconds after Hart came off. Hart was pulled again, and Ovechkin collected yet another empty-netter.

Allergic to staying out of the box

Going into Wednesday’s game, the Capitals were missing plenty of power-play pieces, including center Nicklas Backstrom (hip surgery) and winger Tom Wilson (torn ACL). Their power play was ranked just 23rd in the league (21.05%), but the Flyers didn’t want to give any sort of advantage to the Capitals and Ovechkin, who is sixth in the league in power-play goals this season with six. He’s first among active NHL players in career power-play goals (291).

The Flyers didn’t adhere to that game plan early on, committing four minor penalties in the first 22 minutes of the game. The penalty kill kept the puck out of the back of the net through the first three Capitals power plays, but the dam broke on the fourth. Capitals winger T.J. Oshie ripped a one-timer from the high slot off of a feed from Strome over Hart’s glove to tie the game, 1-1. The Flyers cleaned up their act, however, and finished the night 3-for-4 on the penalty kill.

For the Flyers to have success against the Capitals, it was imperative for them to try to limit Ovechkin. In 68 career games against the Flyers before Wednesday, Ovechkin had registered 44 goals and 30 assists for a Capitals-high 75 points. The Flyers contained him on the power play early on from his usual spot at the left faceoff circle. By the Capitals’ fourth power-play opportunity, Ovechkin started to move from his typical location and hover around the point.

One of his more thrilling chances of the night came late in the first period when he attempted to score from his knees in the low slot with Hart already sprawled on the ice. Ovechkin hit the crossbar and drew a tripping call against center Lukáš Sedlák in the process. Ovechkin was held pointless at five-on-five and on the power play, but he collected the two empty-netters.

Remember when the Flyers boasted the worst power play in the league for the first quarter of the season, converting on just 10 of 75 opportunities (13.3%)? The Flyers are working to flip that trend, going 3-for-6 in their last two games against the New Jersey Devils and the Colorado Avalanche and continuing their success early in the game against the Capitals.

One minute into the man advantage, Hayes snapped his stick on a one-timer and hurried back to the bench for a replacement. He returned 10 seconds later as the unit maintained possession in the zone and regrouped. After Konecny’s shot from the left circle went wide, Hayes collected the rebound and scored on a wrist shot from the point to put the Flyers up, 1-0. The Flyers’ power play went 1-for-3 on the night.

The Flyers embark upon a four-game road trip starting on Friday with a visit to the Vegas Golden Knights at 10 p.m.