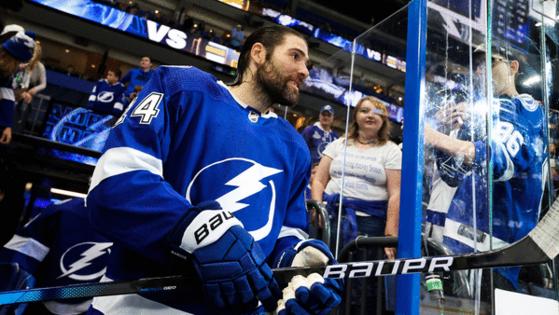 TAMPA, Fla. — Pat Maroon was taking a postgame shower following the Lightning’s 3-1 loss to the Bruins on Tuesday night when teammate Steven Stamkos approached and asked if he had seen a video circulating on social media.

Bruins TV broadcaster Jack Edwards dipped from play-by-play on the NESN broadcast for 40 seconds to make fun of Maroon’s weight. He said that Maroon is listed at 238 pounds, but he’s had “a few more pizzas” since testing was done on the first day of training camp. “(Intermittent) fasting for Pat Maroon is like four hours without a meal,” said Edwards, laughing through the sequence with NESN color analyst Andy Brickley.

“I was kind of in awe a little bit, a little shocked,” Maroon said. “Obviously, I had to calm myself down for a little bit there.”

Inside the Lightning locker room, players and staff were already frustrated by losing a game to the league-leading Bruins that they felt they should have won. And for a tightly-knit group that always comes to each other’s rescue on the ice, they stewed about Edwards’ low-blow jab.

A war of words would not help. Instead, Maroon and the Lightning executed a well-timed counter-punch that made tremendous impact, while helping a local Tampa Bay non-profit along the way.

On Wednesday afternoon, Maroon announced on his social media platforms that he was donating $2,000 to Tampa Bay Thrives in Edwards’ name “in support of those struggling with mental health, bullying and body image.”

As of Friday afternoon, Maroon’s posts had led to $55,000 in donations for Tampa Bay Thrives through the Lightning Foundation.

“There’s always the knee-jerk reaction when something negative happens that you want to attack it or do something without really thinking,” Lightning coach Jon Cooper said. “To take a step back and in situations like these turn negatives into positives, that’s why Pat Maroon is who he is. You really have to tip your hat to him.”