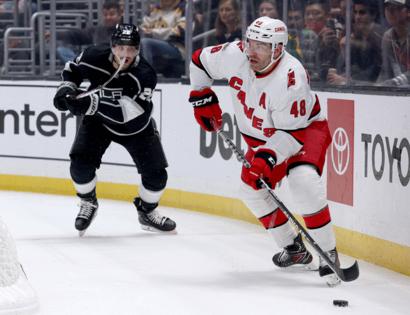 LOS ANGELES – With a six-game road trip ahead, the Los Angeles Kings might have wanted to get away during stretches of a 4-2 loss to the Carolina Hurricanes at Crypto.com Arena Saturday.

Their soaring offense and surging power play were held scoreless through nearly 50 minutes before a late man-advantage marker and later a milestone goal averted their first zero-goal game of the season.

Fagemo out-skated the defense and potted his first career goal with 2:35 to play, but the Kings would draw no closer with Quick pulled for the extra attacker.

The Kings’ fate had already likely been sealed by an own-goal off the skate of defenseman Drew Doughty, which was credited to Svechnikov with 7:50 remaining.

Approaching the midpoint of the third period, the Kings finally found the back of the net. It was their surging power play coming through when center Phillip Danault hit Kaliyev at the right faceoff dot for a one-timer that banked in off Kochetkov’s shoulder.

The Kings began the third period with purpose, as Fiala and defenseman Drew Doughty came out with vigor and nearly generated a redirection goal for Kaliyev. Later in the frame Fagemo ended up with a breakaway but struck the post.

Center Anze Kopitar nearly worked some four-on-four magic for the second straight game as the second period neared its close, but he was thwarted at the back post by Skjei, the second such denial by a Carolina defenseman in as many periods.

Overall, the second stanza left the impression that the Kings were hanging on, absorbing play early then being frustrated by the discipline and doggedness of Carolina. The ax finally fell with 5:49 left with a transition goal. Three Carolina forwards gained the zone with speed before Necas found Aho in front for a goal, the second one of the evening where a player received the puck near the goalmouth but still had time to hesitate and change direction for an uncontested tally.

The Kings had picked up a penalty just before allowing a power-play goal to close the first period, which they killed successfully to start the second. They could ill afford to let the air out, however. Aho knifed the puck wide of an open net, but got it back to take another shot at the aperture. Quick had to lunge face first at full force to deny the bid with his stick, then recovered to make another save on Seth Jarvis three seconds later.

Carolina extended its lead with a mere 19 seconds left in the first period, making good on its first power-play opportunity. Defenseman Brent Burns dished to Necas on the right side, where he powered a shot that hit defenseman Mikey Anderson’s stick and a body on its way past Quick at the far side. It was the Czech’s 12th goal and team-topping 27th point.

The visitors got on the board first 4:01 after the puck dropped. Winger Jordan Martinook creatively controlled a loose puck, lofting the puck ahead to himself, and created a two-on-one rush once Skjei joined the play. Martinook slipped a pass to Skjei, forcing Quick to push hard to his right. Skjei calmly transitioned from forehand to backhand to deposit the puck casually to Quick’s left.