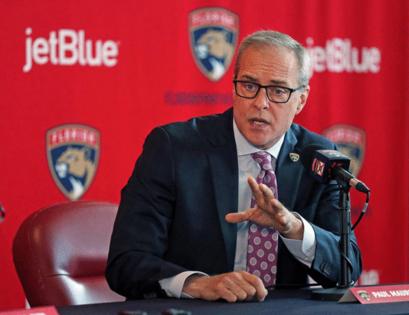 By the time the first hour of the first session was over Thursday in Coral Springs, Paul Maurice had already stopped practice and barked some colorful language at his new players. By the time those players trudged back to the locker rooms at the Florida Panthers IceDen, they were gassed after closing each session with about 30 minute of conditioning work and board battles.

If there was one similarity between the first day of camp and the first day of school, it was the endeavor of the instructor to set expectations, only Maurice wasn’t content to just tell his pupils what to expect. He wanted to show them.

“We’re going to do things a certain way. We’re all new — new coaching staff, new players. There’s going to be a level,” Maurice said. “I didn’t feel that I needed to — and I felt this as the practice is going — get their attention, so you’re going to run a practice so hard today that you’ll never run again. We just practiced the way we’re going to practice, and it was hard and they handled it.”

A new era for the Panthers officially kicked off this week, as Maurice replaces former interim coach Andrew Brunette, who’s now an assistant coach with the New Jersey Devils, and a revamped roster formally comes together after a blockbuster trade sent All-Star left wing Jonathan Huberdeau and star defenseman MacKenzie Weegar to the Calgary Flames in exchange for All-Star left wing Matthew Tkachuk.

The busy offseason was an acknowledgment from management about just how far away Florida is from its ultimately goal, even after winning its first Presidents’ Trophy last year. A four-game sweep at the hands the Tampa Bay Lightning in the second round of the 2022 Stanley Cup playoffs left an obvious “sour taste,” Tkachuk observed, and exposed some of the Panthers’ more fatal flaws.

Their wide-open, high-scoring approach clearly worked in the regular season, as they led the NHL with 122 points. It also crashed and burned in the Stanley Cup playoffs in back-to-back years.

The trade for Tkachuk fits with the stylistic pivot Florida is aiming for — he’s a more established two-way player than Huberdeau. The hire of Maurice will play an even more important role.

“It’s going to be definitely different,” defenseman Radko Gudas said. “He understands the game that he knows the things we’ve been doing are working and sees the thing that aren’t working, and saw the way we exited the playoffs last year and he certainly doesn’t want to do that this year. He said right away from the start that the things that he wants the team to be working on and feel like it’s playoff-like hockey since Game 1.”