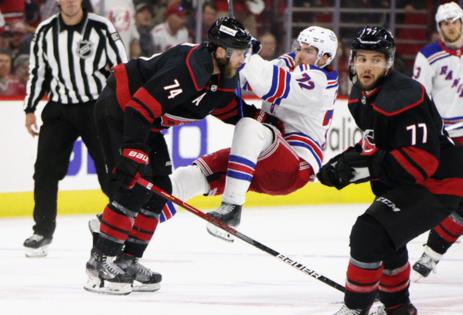 RALEIGH, N.C. — The Carolina Hurricanes were playing at home in the playoffs.

The Canes scored a power-play goal and a short-handed goal.

That all added up to a 3-1 victory in Game 5 of the second-round playoff series at PNC Arena, keeping the Hurricanes undefeated at home in the playoffs and now one win away from advancing to the Eastern Conference finals.

The Canes will get that chance in Game 6, Saturday at Madison Square Garden in New York. While 7-0 at PNC Arena, the Canes are 0-5 on the road and lost their first two games to the Rangers at the Garden.

Vincent Trocheck had the Canes’ short-handed score in the first period and Teuvo Teravainen had the power-play strike in the second – Carolina’s first power-play goal in the series.

When Andrei Svechnikov forced a turnover and scored on a breakaway in the third, cleanly beating Igor Shesterkin with a backhand through the pads with seven minutes left in regulation, PNC Arena was rumbling.

It wasn’t a very busy day for Canes goalie Antti Raanta but he had his share of timely stops, including a save against Chris Kreider before Svechnikov’s breakaway.

The Canes did everything needed to win this day Rookie forward Seth Jarvis might have lost a few teeth, and certainly lost some blood, taking a Ryan Strome stick in the mouth as the Rangers forward got off a shot in the second period.

The Rangers found good shots — or any shots — hard to come by, finishing with 17 in the game. One factor in limiting the New York shots: possession time. The Canes spent a lot of time in the New York zone, making the Rangers skate and work.