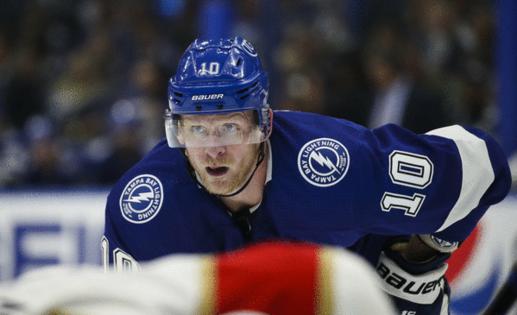 TAMPA, Fla. — The Lightning’s power play has been known as a threat throughout the NHL for years.

It’s hard to find a weakness on Tampa Bay’s top man-advantage unit, with Victor Hedman at the point, Steven Stamkos in the left circle, Nikita Kucherov in the right, a rotation of players around the net and Brayden Point in the slot.

So, when Point sustained a lower-body injury in Game 7 of the opening round against the Maple Leafs, it left a critical hole to fill.

But it wasn’t a concern Tampa Bay had for long, as Corey Perry quickly showed he was up to the job, scoring a pair of power-play goals in the second-round series against the Panthers. Perry has made a name for himself during a 17-year NHL career by hanging around the net and pestering those inside the blue paint.

“It’s a new position (on the power play) for me,” Perry said before Game 3. “I haven’t played it much. I’m normally a little lower to the crease, but it’s a work in progress and we’ll continue to work on it.”

Through all 11 playoff games, the Lightning are 11-for-48 with the man-advantage (22.9 percent), ranking eighth in the league before Thursday’s games between Calgary and Edmonton, and New York and Carolina.

Before Game 1 against the Panthers, Perry sat down with assistant coach Jeff Halpern, who works with the power-play units. Reviewing video together from the Toronto series, they honed in on what Point did in the bumper (slot) position.

Perry specifically paid attention to Point’s positioning: where he stands and how he finds openings to slip pucks past goaltenders. He’s also seen how critical it is to be ready for anything with Kucherov and Stamkos at his sides.

“I kind of meshed (my play and Point’s play) together and made my own out of it,” Perry said ahead of Game 4. “We’ll just continue to work at it, and it’s a work in progress.”

The work put in ahead of time resulted in some key power-play goals for the Lightning during their four-game sweep of the Panthers.

In Game 1, Kucherov worked his way into the offensive zone, making an impressive inside-out move on Panthers defenseman Aaron Ekblad, then sent a no-look pass across the slot to Perry on the right side. Perry tapped the puck past goaltender Sergei Bobrovsky to tie the score at 1 during the second period of a 4-1 win.

“He’s a (future) Hall-of-Famer, and he knows what he’s doing,” Kucherov said of Perry (who has more than 400 career goals) after the game. “He saw Pointer through a year, he saw what he did, and he’s really good down there. We didn’t really change anything. We just stick to the plan, and execution was the key.”

Perry capitalized in a different way in Game 2, redirecting a Stamkos shot-pass past Bobrovsky from his spot in the slot to open the scoring more than halfway through the first period of a 2-1 victory.

“I think for (Perry), it’s just getting more experience in touches, in game, in practice,” Halpern said. “He’s a world-class player, and it may not be the spot on the power play that he’s played in the past, but he’s adapted really quick.”