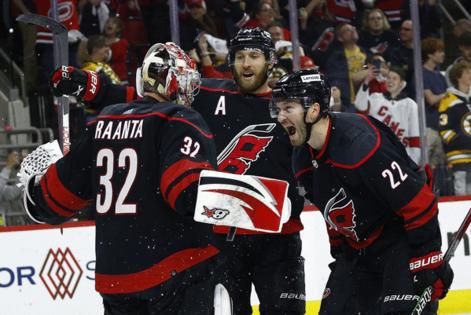 RALEIGH, N.C. — In the same sense that we’re doomed to repeat the same stupid timeline over and over again off the ice — a New York broadcaster using the word “hillbilly” to describe the Carolina Hurricanes, and before the series even starts — there’s a pretty good chance the second round is going to look a lot like the first for the Carolina Hurricanes.

Opponent loaded up with elite talent on its top two lines? Check.

Dangerous power play that will put a premium on the Hurricanes’ discipline? Check.

Other than the presence of Igor Shesterkin in net, the biggest difference between the Boston Bruins and New York Rangers might be that the Bruins were a little more top-heavy and the Rangers are a little more balanced across their top six forwards, but the Hurricanes’ recipe for success hasn’t really changed: Jordan Staal’s line will likely take on the challenge of Mika Zibanejad and Chris Kreider, the Hurricanes will have to mind their tempers and sticks alike and stay out of the penalty box, and the Hurricanes’ advantage is their depth across all four lines.

Shesterkin is a massive upgrade over Linus Ullmark and Jeremy Swayman, and that will be a new test for the Hurricanes, but there’s plenty of room for improvement in all areas of their game from the first round. Their power play has to be better, their penalty kill has to be better (and less frequently relied upon) and there needs to be more of an offensive threat from all four lines, especially on the road where the Hurricanes can’t control the matchups.

“The goaltending is huge,” Hurricanes coach Rod Brind’Amour said. “He comes up big for them and allows them to play that aggressive, offensive style that they have. They’re danger, all the time. Special teams, power play, they’ve got an elite group. There’s a lot to worry about.”

Max Domi’s performance in Game 7 is a good example of how the Hurricanes win at their best, but the Canes still need more from the Sebatian Aho-Andrei Svechnikov-Seth Jarvis line, and everyone needs to do a better job of converting five-on-five dominance into not only scoring chances, but goals.

That hasn’t changed from the first round. The opposing jerseys are different. The goaltending will presumably be better. There are more familiar faces on each side. But the global mission has not changed. The Hurricanes will have to beat the Rangers the same way they eventually beat the Bruins, by absorbing their attack and wearing them down at even strength. And if they want to win in fewer than seven games this time around, they’ll need to convert on the power play at critical moments as well.

“A big thing for this series is going to be staying out of the box, just like Boston,” Hurricanes defenseman Brady Skjei said “They had a great power play and the Rangers do, too. It’s something we definitely need to focus on.”

If it all sounds a little too familiar … it is.

That’s not the only history repeating itself. Howie Rose, the former New York Islanders broadcaster who should know better, tweeted Tuesday that the Hurricanes’ policy of restricting ticket sales to local zip codes was “Barney Fife hillbilly baloney,” never mind that many teams, including the New York Yankees, do as well.

The story to which he referred implied that the Hurricanes were having trouble selling tickets, only days after the team set a PNC Arena record for hockey in the Game 7 win over the Bruins, almost 1,000 over listed capacity.

The good people of the Triangle at least made it through the Boston series without being called “goobers” or “hicks” by the Boston Globe, and that only took four playoff series over 13 years. And it’s been 20 years since Mitch Albom made an ass of himself with his despicable “Moonshine and me” column that played on every cheap, lazy stereotype he could borrow from someone else.

This stuff is as dumb as it is tiresome, all cloaked in the same sort of ignorant elitism that comes from fringe elements of the Canadian media at times. You never hear this kind of talk during, say, the ACC-Big Ten Challenge, for some reason.

And those so quick to cast aspersions should remember references to Mayberry can cut both ways. The N&O’s headline after the Hurricanes’ Game 1 win in Detroit: “Shazam!”