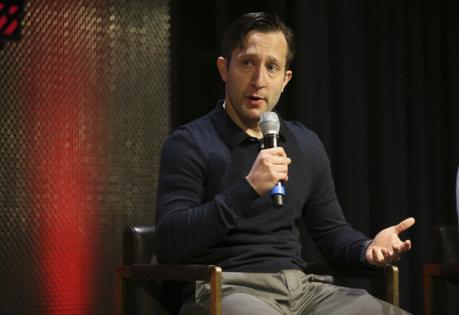 Here’s a former Chicago Cubs assistant general manager, who worked in baseball for 16 years, making the leap to professional hockey — and not just switching from another sport but occupying one of the Chicago Blackhawks’ top three front-office positions as an associate general manager.

“Sure,” Greenberg said Monday, his expression suggesting it’s not the first time he has heard the skepticism. “(But) the hardest part of the decision was leaving the Cubs.”

“Honestly, I have so much respect for (current Cubs President) Jed (Hoyer) and the entire group there, and I really believe in what they’re doing,” Greenberg said. “That, for me, was the hardest part, not so much going into hockey from baseball.”

That’s not to say Greenberg expects his transition to the NHL to be a cakewalk.

“I’m trying to learn, absorb as much as I can,” he said during an introductory news conference with fans at the United Center Concert Club.

But it’s what the rebuilding Hawks can learn from Greenberg that inspired general manager Kyle Davidson to take the unusual step of hiring someone from outside hockey to round out his top leadership group with fellow associate GM Norm Maciver.

Davidson hopes Greenberg can take “the systems sophistication that he brings to the Cubs, and seeing that sort of build that is going on in baseball, and bring that expertise over to us.”

Greenberg said he wants to modernize the Hawks’ scouting, analytics and other information systems — making them as expansive as what the Cubs and most baseball teams have — and warehouse them in one system that’s seamlessly accessible to players, coaches, scouts and operations staff at all levels of the organization.

While many in hockey circles still see former New York Ranger coach David Quinn as the front-runner – with a ...Read More