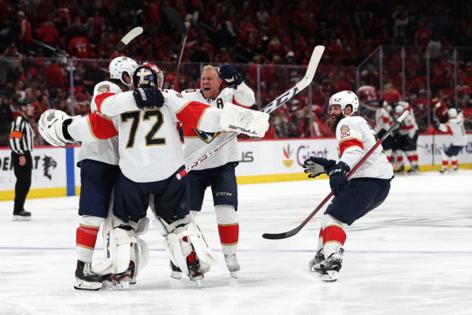 There were five owners, not counting the group of eight investors briefly fronted by beloved Miami quarterback Bernie Kosar, who said hockey was his, “first and special love” before fading away to the bigger wallet of Alan Cohen.

Cohen faded away after four indifferent seasons, telling people he liked investing in horses more than hockey players because, “They don’t talk back.”

Cliff Viner bought the team. His tenure’s memory is of attempting a quiet divorce in Key West where his ex-wife’s relinquishing of any right to the Panthers became such a talk-story the team released a statement on it all.

Does this help any? Does it begin to explain why Friday mattered? Does it tell of the long and tortured treadmill the Panthers had been skating on for more than a quarter-century?

At 10:43 p.m. on Friday night, Carter Verhaeghe was again the cavalry, scoring in overtime as the Panthers beat Washington in a 4-3 thriller. That meant the Panthers won a playoff series. That’s no typo. They actually won a series. A ghost went poof.

“I’m not going to lie, it feels amazing,’’ said Aleksander Barkov, who is in his ninth Panthers season.

Dolphins fans bemoan not winning a playoff game since 2000. The Marlins haven’t won since 2003. That’s kids’ stuff compared to the Panthers and their 26 years between advancements in the playoffs.

Here’s one story: Pavel Bure led the league with 58 goals in 1999-2000, and was benched in a playoff series where the Panthers were swept by New Jersey. Benched.

Nobody associated with the Penguins seemed to want to say much about Sidney Crosby's potential return for Game 7 of their first-round playoff series against the New York Rangers on Sunday at Madison Square Garden.

FORT WORTH, Texas — His name was Roman Lyashenko, and the ruling was suicide.

WASHINGTON — Carter Verhaeghe wheeled his arm into a fist pump and, suddenly, two and a half decades of frustration for the Florida Panthers were over.

The forward — the hero of this series for and a game-tying ...Read More

PITTSBURGH — The Penguins enter Game 6 against the New York Rangers without their captain Sidney Crosby, their No. 1 netminder Tristan Jarry and top-pairing defenseman Brian Dumoulin.

Crosby, who took an elbow to the ...Read More

LOS ANGELES — Rebuilding a team goes beyond filling roster spots, past finding right-handed-shooting defensemen to pair with left-handed shooters and acquiring role players who fit alongside the franchise’s foundations...Read More

For the first time since the Stanley Cup season, the St. Louis Blues have made it out of the first round....Read More