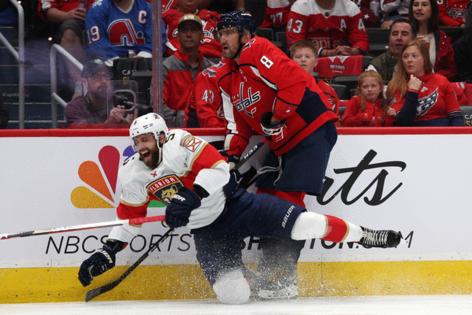 FORT WORTH, Texas — His name was Roman Lyashenko, and the ruling was suicide.

On July 6, 2003, Lyashenko left a note in his Turkish hotel room where he was discovered after he hanged himself during a family vacation; his suicide note said he had an incurable disease.

The doctors who completed the autopsy found no disease.

Those with the Dallas Stars at the time suspected this was not a suicide and that Lyashenko was a victim of foul play that is not entirely uncommon in Russia.

Today’s Russian-born players are free to come to North America and play in the NHL, but they do not enjoy the same freedoms as their teammates.

This is the reach of Vladimir Putin.

As the NHL’s Stanley Cup playoffs continue, you will notice the continued silence from its Russian stars, most notably Washington Capitals forward Alex Ovechkin.

They do not want to talk about Russia’s war with Ukraine, which is now in its third month.

WASHINGTON — Carter Verhaeghe wheeled his arm into a fist pump and, suddenly, two and a half decades of frustration for the Florida Panthers were over.

The forward — the hero of this series for and a game-tying ...Read More

PITTSBURGH — The Penguins enter Game 6 against the New York Rangers without their captain Sidney Crosby, their No. 1 netminder Tristan Jarry and top-pairing defenseman Brian Dumoulin.

Crosby, who took an elbow to the ...Read More

LOS ANGELES — Rebuilding a team goes beyond filling roster spots, past finding right-handed-shooting defensemen to pair with left-handed shooters and acquiring role players who fit alongside the franchise’s foundations...Read More

For the first time since the Stanley Cup season, the St. Louis Blues have made it out of the first round....Read More

TAMPA, Fla. — Facing elimination Thursday night at Amalie Arena, the Lightning had experience and history on their side against the Maple Leafs.

But few moments could have prepared the Lightning for a do-or-die Game 6 ...Read More

The Boston Bruins lived to play another day Thursday, topping the Carolina Hurricanes, 5-2, in Game 6 of their Stanley Cup playoff series to force a seventh and deciding game.