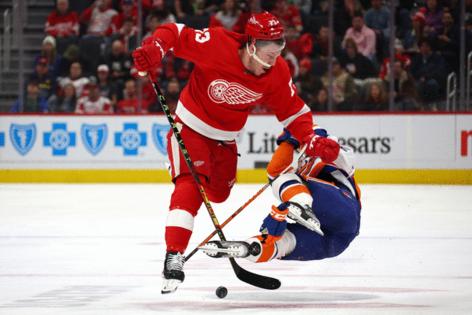 Defenseman Moritz Seider scored his third goal of the season — and second overtime game-winner — Saturday, leading the Wings to a 4-3 victory over the New York Islanders.

Islanders forward Oliver Wahlstrom scored his second power-play goal of the night (and seventh goal) at 12:33 of the third period, tying the game 3-3.

Filip Hronek, Sam Gagner and Givani Smith had the other Wings goals.

Smith's goal broke a 2-2 tie, his second goal of the season. Smith held the puck on a 2-on-1 rush, got to the dot, and blasted a shot past Islanders goalie Ilya Sorokin, just after Wahlstrom had tied it on the power play.

Hronek lifted a shot from the point that flew by Sorokin's glove at 5:18, Hronek's second goal, tying the game 1-1.

The Wings took the lead on Gagner's third goal, at 7:37. Carter Rowney caused a turnover deep, Smith pushed the puck to Gagner near the net, and from just below the goal line, Gagner banked a shot off Sorokin's back into the net.