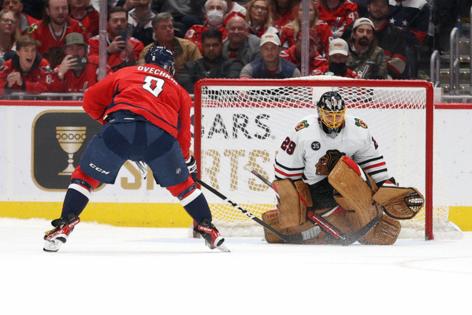 Jonathan Toews scored first for the Hawks in the shootout, and Patrick Kane followed with one of his own.

Alex Ovechkin couldn’t put the puck past Marc-André Fleury, sealing the win for the Hawks.

After opening the scoring in the first period and taking a second lead in the second, the Hawks came from behind to tie it on Seth Jones’ third-period goal, set up by Josiah Slavin.

The assist was the first career point for Slavin, who made his NHL debut playing on the fourth line with Mike Hardman and Ryan Carpenter.

Coming into Thursday night’s matchup, the Capitals scored at least four goals in the last four games and in five of the last six. But the Hawks seemed intent on playing keep-away from the high-powered Caps skaters — at least in the first period.

The Hawks displayed disciplined puck management — with no giveaways in the first period — kept rushes and premium shots to a minimum and patiently waited for opportunities.

Yet some the offensive opportunities still were there.

Slavin set up Hardman nicely on a 2-on-1, but Hardman missed wide.

But Alex DeBrincat cashed in on a give-and-go with Kane, dragging the puck around Vitek Vanecek for his 13th goal. Kane has assisted on seven of them. Jones also was credited with an assist.