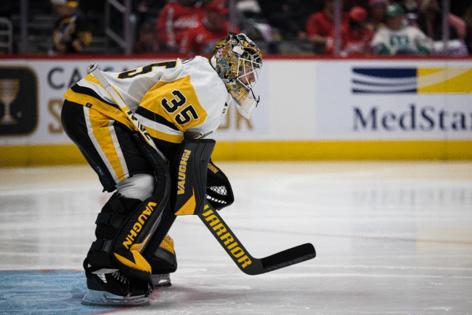 CALGARY, Alberta — Tristan Jarry came ready to play. His teammates did not.

It was arguably their worst performance this season. If not for Jarry, who made 31 saves, they might have lost 6-1. They were that bad and he was that good.

And yet, improbably, the Penguins were able to escape with a point, losing in a shootout, 2-1, to the Calgary Flames at Scotiabank Saddledome on Monday.

Calgary’s Mikael Backlund scored in the seventh round to win it for the Flames.

The Penguins were looking to start a new winning streak Monday in Calgary after the Montreal Canadiens snapped their five-game run Saturday at PPG Paints Arena. But Monday’s loss was the second in a row for Mike Sullivan’s squad.

The Flames peppered Jarry throughout the first period. The home team had a 4-on-1 rush in the early going. Those are about as common as a Kasperi Kapanen haircut, but Jarry kept the puck out. Later on, he smothered Johnny Gaudreau’s tap-in try then sprawled over to get his glove on Elias Lindholm’s shot.

Seven of his 10 saves in the first were on shots from the slot, per Sportlogiq.

The Penguins, on the other hand, didn’t muster much offensively in the opening period. For much of it, they had more icing infractions than shots on goal.

Calgary’s three-man forecheck posed them problems. Flames forwards hustled in then stuck to the boards, forcing several careless passes into the middle.

The Flames kept coming in the second period. Jarry made a few more big saves and Gaudreau rang the right post before they finally beat him midway through.