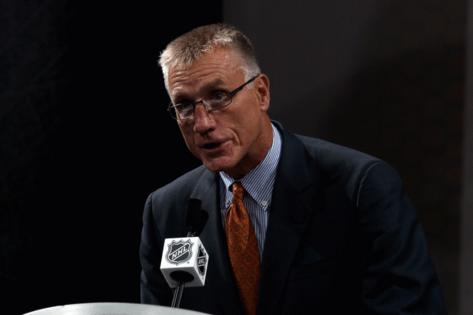 Paul Holmgren, who has seemingly filled every job with the Flyers except popcorn vendor, is going into the United States Hockey Hall of Fame.

Peter McNab, a former NHL standout who is now a Colorado broadcaster, and journalist/broadcaster Stan Fischler will also be enshrined at a still-to-be-announced date in December, a Hall of Fame spokesperson announced Thursday.

Holmgren, 65, a native of St. Paul, Minn., has spent more than 40 years with the Flyers over parts of six decades. He has also made major contributions to American hockey on other stages, including serving as an original member of the U.S. Men’s National Team Advisory Group and helping guide Team USA to the 1996 World Cup of Hockey championship.

In 2006, he was the general manager of the U.S. Men’s National Team, and he has also served as an assistant GM and assistant coach for Team USA in the Olympics.

Holmgren said he was “deeply humbled and enormously grateful” to be given the Hall of Fame honor.

“Growing up in Minnesota, and reflecting as far back as I can remember, United States hockey is a program that I have looked up to and always strived to be a part of,” he said in a statement “I am incredibly proud to have had the fortune to wear and represent the Red, White, and Blue during each and every occasion I have been asked.”

Holmgren recorded 323 points (144 goals, 179 assists) in 527 games over 10 years in the NHL. He helped his teams to the Stanley Cup playoffs in each of his nine full seasons in the league and contributed 51 points in 82 postseason appearances.

Selected out of the University of Minnesota in the sixth round of the 1975 NHL draft, Holmgren played his first 500 games with the Flyers in parts of nine seasons. His Flyers teams reached the Stanley Cup Final in 1976, and 1980, when he became the first American-born player in NHL history to record a hat trick during the Stanley Cup Final.

Holmgren earned a spot in the 1981 All-Star Game and was the lone American on the Campbell Conference team.

“Both on and off the ice, Paul Holmgren has made incredible contributions to the sport of hockey,” said Dave Scott, the Flyers’ chairman and governor.

As a player, he had his best individual season in 1979-80, when he finished with a career-high 30 goals and helped the Flyers put together their 35-game unbeaten streak — still the longest such streak in North American sports history.

SUNRISE, Fla. — The Florida Panthers knew they had a chance to make some history this season.

It only took them four games to do it.

The Panthers blew an early lead Thursday in Sunrise, then scored twice and added an ...Read More

NEWARK, N.J. — It might be a new season for the Devils, but their struggles against the Capitals have stretched into the 2021-22 campaign.

After winning their opening two games, the Devils were humbled in a 4-1 loss ...Read More

KANATA, Ontario — Kevin Labanc’s second-period power-play goal proved to be the difference as the Sharks continued their perfect start to the season with a 2-1 win over the Ottawa Senators on Thursday.