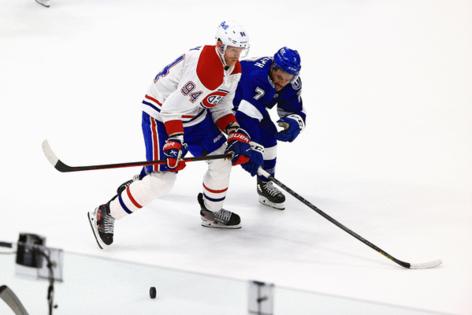 TAMPA, Fla. — The thorn in the Lightning’s side the past two postseasons now will be on their side.

“We are excited to add Corey today, who brings with him a wealth of big-game experience to the Lightning,” general manager Julie BriseBois stated in a news release. “He will be an excellent addition to the lineup, and we are thrilled to add another high-character player to our group who can contribute to the organization’s overall depth.”

Perry played in the Stanley Cup Final with Dallas in 2019-20 and Montreal in 2020-21, scoring four goals between the two series. His teams lost to Tampa Bay on both occasions, but he did win a Cup with Anaheim in 2007.

Perry, 36, has scored 386 goals and accumulated 818 points over 16 NHL seasons. He had nine goals and 12 assists during the shortened 2021 regular season, then added four goals and six assists in the playoffs.

After 14 seasons with the Ducks, where he was teammates with the Lightning’s Pat Maroon for five seasons, Perry signed with the Stars as a free agent before the 2020 season and then moved on to the Canadiens the following season.

The Blues have agreed to terms on a five-year, $22.5 million contract with free-agent forward Brandon Saad.

The move gives the team a desperately-needed left winger who will step in immediately to their top six.