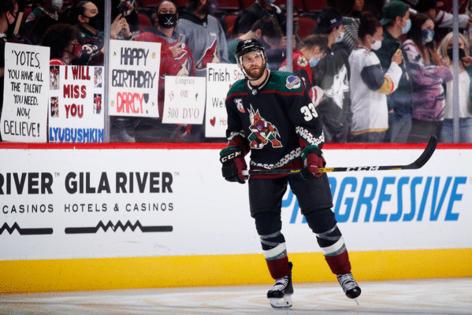 This deal includes a no-movement clause, a source said.

Goligoski, who's from Grand Rapids, Minn., and played three seasons with the Minnesota Gophers, spent the last five years with the Coyotes. In 56 games last season, he recorded three goals and 19 assists. Overall, the 35-year-old has 83 goals and 346 assists for 429 points in 924 career games with Pittsburgh, Dallas and Arizona while establishing himself as a savvy defender who can play both sides of the blue line.

A left shot, Goligoski could slide into the vacancy on the Wild's top pairing next to captain Jared Spurgeon — a spot previously held by Ryan Suter, who signed a four-year, $14.6 million contract with Dallas after the Wild bought him out earlier this month.

The team has two other holes on the back end after Carson Soucy was picked up by Seattle in the expansion draft and Ian Cole became a free agent.

Also look for the Wild to address its forward group in free agency.

The Wild started the day by trading defenseman Brennan Menell to Toronto for a conditional seventh-round draft pick in 2022; if Menell plays 30 games with the Maple Leafs next season, the Wild will receive the pick.

Marc-Andre Fleury, one of the most popular players in Penguins history, was traded by the Vegas Golden Knights to the Chicago Blackhawks on Tuesday. His agent, Allen Walsh, tweeted shortly thereafter that the goalie will ...Read More