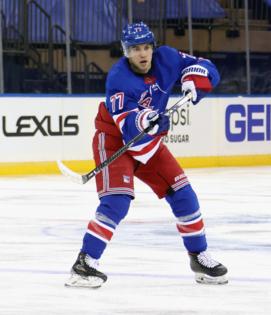 The Canes signed defenseman Tony DeAngelo to a one-year, $1 million contract. DeAngelo's signing gave the Canes a right-shot D-man with solid offensive skills — in theory, to help offset the loss of defenseman Dougie Hamilton, if he left the Canes in free agency — but also would come with a price.

DeAngelo's personal background, on and off the ice, is problematic. The former New York Rangers defenseman, 25, was suspended in his junior hockey days in the Ontario Hockey League for abusive behavior. He has abused officials, in the OHL and NHL. He was put on unconditional waivers this past season by the Rangers after an incident involving a teammate and had his contract bought out, making him a free agent.

"Tony is a smooth-skating, puck-moving defenseman," Canes president and general manager Don Waddell said in a statement Wednesday. "We've done a lot of background work on this player and we are confident that he can be a positive addition to our group."

DeAngelo's social media use has created negative attention. A supporter of former President Donald Trump, DeAngelo has tweeted about the 2020 presidential election being rigged. He also questioned the severity of the coronavirus pandemic on Twitter.

DeAngelo, 25, deactivated his Twitter account after Trump was banned from the platforming following the storming of the U.S. Capitol in January. DeAngelo then said he would join Parler, another social media platform favored by Trump supporters and some ultra-conservatives.

The news about DeAngelo, first reported on Twitter by Frank Seravalli, created a big stir Tuesday among a number of Canes fans, who took to Twitter and other social media avenues to voice their disapproval and continued it Wednesday.

Some noted that the Canes have cited the building of a "culture" of winning and the desire to bring in the right kind of player.

Marc-Andre Fleury, one of the most popular players in Penguins history, was traded by the Vegas Golden Knights to the Chicago Blackhawks on Tuesday. His agent, Allen Walsh, tweeted shortly thereafter that the goalie will ...Read More

SEATTLE — Despite what the draft board says, it's Matty Beniers. He never felt like a Matthew or a Matt, so Matty it is.

It's better that way, though, isn't it? If you're going to be Seattle's next sports superstar, it'...Read More