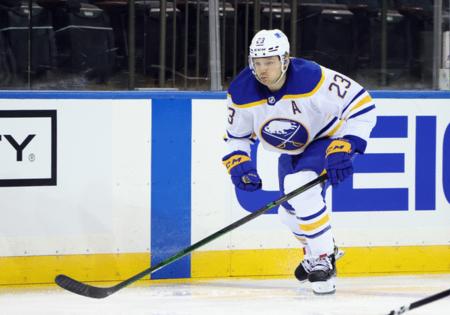 The Florida Panthers are done rebuilding. After one of the best seasons in franchise history, the Panthers used Day 2 of the 2021 NHL entry draft to upgrade their current roster while giving up future assets.

Sam Reinhart, a former top-five pick and first-line forward for the Buffalo Sabres, is headed to Florida. The Panthers are ready to make a run at the Stanley Cup.

“I’m thrilled about having that opportunity with a group that is expecting to win on any given night,” Reinhart said. “I’m absolutely thrilled and motivated to come to a group that is hungry, trying to make it to the next step.”

It’s easy to view the trade — which sent a 2022 first-round pick and a goaltender prospect Devon Levi to the Sabres — as a “win-now” move. Bill Zito, however, rebuffs the notion.

“I wouldn’t say so much it is win now,” the general manager said. “I think in this business maybe it’s win every day.”

Reinhart is 25, just like versatile forward Sam Bennett, whom Florida gave up a 2022 second-round pick to get in April, and just like star center Aleksander Barkov, defensemen Aaron Ekblad and Gustav Forsling, and wingers Carter Verhaeghe and Anthony Duclair.

All-Star left wing Jonathan Huberdeau is 28. Star defenseman MacKenzie Weegar is 27, as is winger Frank Vatrano. The Panthers have 11 forwards likely to be in the opening-day lineup, and 10 are between 22 and 29.

Florida spent the last few months giving up draft picks to get better, but the additions, Zito hopes, are building blocks and not just short-term rentals.

“They’re all sort of in that same temporal scope of their careers, where they can grow together and hopefully enter their primes together,” Zito said. “That’s a focus that we acknowledge and we’ll be fruitful.”

The Panthers still made all five of the picks they had at the start of the day Saturday, too. After taking American right wing Mackie Samoskevich with the No. 24 overall pick in the first round Friday, Florida drafted three defensemen, two forwards and a goaltender in Rounds 2-7 on Saturday.

In an exchange of highly productive right wingers, they acquired Cam ...Read More

ST LOUIS — Trader Doug Armstrong is at it again. Just a few hours before the NHL draft, the Blues announced they had traded forward Sammy Blais and a second-round draft pick in 2022 for New York Rangers winger Pavel ...Read More

SEATTLE — Kraken general manager Ron Francis was known throughout his Hall of Fame career for his unrelenting center play at both ends of the ice.

The 6-foot-5, 207 pound Edvinsson played 24 games for Frolunds and Vasteras in Sweden, and has been ...Read More

SECAUCUS, N.J. — The Chicago Blackhawks were in the market for a big-ticket defenseman, and they landed one in a blockbuster draft-night trade Friday, acquiring four-time All-Star Seth Jones from the Columbus Blue ...Read More