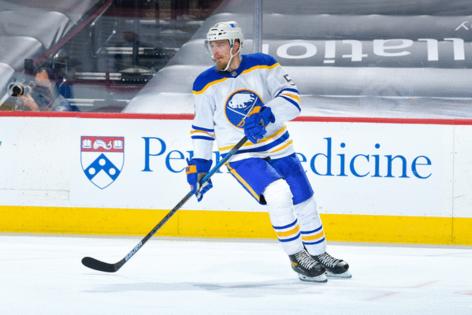 They acquired physical defenseman Rasmus Ristolainen from Buffalo for defenseman Robert Hagg, the first-round draft selection Friday night, and their second-round pick in 2023.

“He immediately adds grit to our team,” general manager Chuck Fletcher said, adding that Ristolainen was “a player we’ve been looking at over the last three years.”

“I’m a player the other team hates to play against, and I try to be a pain in the ass,” Ristolainen said in a Zoom call with reporters. “... I can’t wait to get to Philly.”

Ristolainen said that he “knew something might happen this weekend” and that he was “very excited to go Philadelphia. I’m going to do everything I can to help the team make the playoffs and have a run there. All I care about is winning.”

The Flyers D may look like this: Ivan Provorov and Ellis; Travis Sanheim and Ristolainen; and rookie Cam York and Justin Braun. That gives them three righties and three lefties, and a veteran with a relatively young player on each pair.

“I think any time players are slotted in the right role and with the right players around them, they have a much better chance to improve and look better,” Fletcher said. “We’re obviously banking on that.”

The makeover was needed because the Flyers allowed the most goals in the NHL last season.

The pain and anger...Read More

The team announced Monday that recently-hired assistant Sylvain Lefebvre opted not to get a COVID-19 vaccine ...Read More