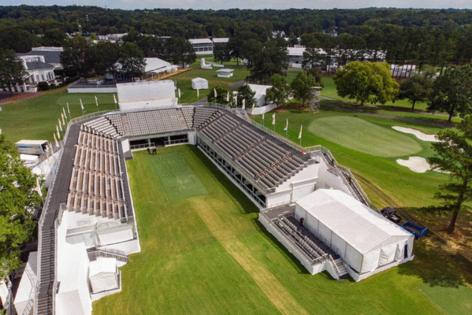 The Presidents Cup, an international golf tournament that pits some of the best golfers from the United States against some of the best from the rest of the world, begins at Quail Hollow Club in Charlotte on Thursday. The two teams’ captains were made available to media on Tuesday — and they spoke on their appreciation for the course renovations ahead of the event, their thought processes for this year’s team selections (and how the LIV Tour looms in those selections), which team would win in a pickup basketball game (?) and more.

Here’s what you should know.

The U.S. squad is this year’s Presidents Cup favorite. In basketball, too?

Among the ways the two are similar: The U.S. is generally the favorite.

For this made-for-TV extravaganza, there’s no fooling this year’s captains — one team is favored over another.

“We’re used to being called the favorite,” said Davis Love III, the captain of the American team. “Even when we lose three Ryder Cups in a row, they tell us, ‘Oh, but they’re the favorite.’ The other captain or the other team or you guys remind us that we’re the favorite. So we’re used to that. That’s on paper, and a lot of great coaches will tell you the game’s not played on paper. They’re played out there on the golf course.”

He added: “In the regular season, we only play it once because you never know what’s going to happen.”

SUGAR GROVE, Ill. — Bryson DeChambeau is one of the most recognizable faces in golf and one of the LIV players involved in the antitrust lawsuit against the PGA Tour that bars defectors from competing in its events.

DFW’s two major PGA Tour stops aren’t exactly sure how the competition between the Tour and LIV Golf will affect their respective tournaments, but there will be a cut line.

Neither the Charles Schwab Challenge at ...Read More