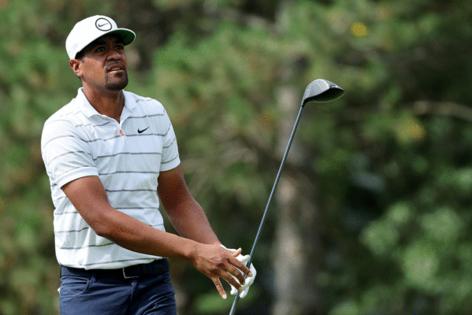 DETROIT — Birdies are plentiful at the Rocket Mortgage Classic, which is why Tony Finau was kicking himself — just a little bit — even after carding an 8-under 64 to take the first-round lead Thursday at Detroit Golf Club.

What could Finau be upset about, especially considering he was just days removed from a win at the 3M Open, the third title of his PGA Tour career?

Probably the fact the single-round tournament record was there to be matched as Finau lined up a 20-foot birdie putt on the ninth green, his final hole of the day. His putt had the line but it came up just inches short, denying Finau from becoming the fourth golfer to shoot a 63 at the Rocket Mortgage Classic.

"My last shot lacked a lot of conviction," Finau said. "I wanted to at least get it to the hole, give it a shot. A few of my putts were like that out there, just left them right in the heart a little short. Wasn't super happy that I left it short, but overall it was a nice round."

It's hard to quibble much with the round Finau had considering he hit all 18 greens in regulation and didn't have a single bogey. The par at the par-5 fourth hole might have felt like a bogey, but it didn't change the fact Finau put himself in good position to become a back-to-back winner.

"Obviously 64 is a very good round," Finau said. "But this is a golf course where a lot of guys are going to make birdies, so anytime you can get off to a fast start, I think it's much needed on a golf course like this."

Finau was joined at the top of the leaderboard by relative unknown Taylor Pendrith, who had nine birdies on his round that included a bogey on the 18th. Five players were two shots back at 6 under, including former U.S. Open champion Webb Simpson, Michael Thompson, Cam Champ, Matt Wallace and Lee Hodges.

There were plenty of birdies in the morning wave of Thursday's first round. By the time the afternoon groups hit the course, the wind had picked up and the scoring became tougher.

Only Charley Hoffman made a significant charge in the afternoon, getting to 6 under while starting on the back nine before missing a short birdie putt on No. 5 and following that with a bogey at No. 6. He then three-putted the par-5 seventh on his way to a second-nine 36 to end the round at 5-under 67.

Hoffman was part of a logjam three shots off the lead with 13 other players, including American Ryder Cup captain Zach Johnson.