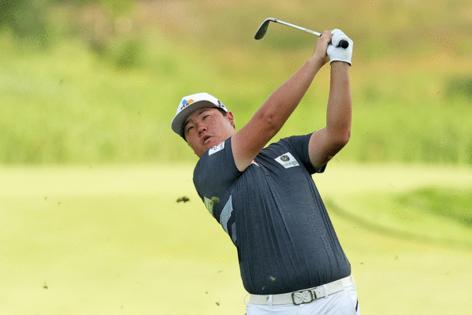 The two remaining at the TPC Twin Cities are 24th-ranked Sungjae Im and No. 17 Tony Finau. Both are on the leaderboard's first page after a blustery summer day that favored those who played in Thursday morning's comparatively calm conditions.

Im is tied with PGA Tour veteran Scott Piercy for the lead after each shot a 6-under-par 65.

Finau, Fargo's Tom Hoge and three others are two shots back after they all shot 67. Defending champ Cameron Champ shot a 75 that included a closing bogey and Matsuyama, who played the back nine first, shot 77 before he withdrew.

A two-time PGA Tour winner and 2020 Masters runner-up, Im sent a video to his coach after he struggled on the greens in recent weeks, including Sunday's 81st-place finish at the British Open.

Together, they adjusted Im's takeaway with his putter, straightening his backswing and squaring the clubface.

"I make a change," Im said through a Korean interpreter. "I had a lot of birdie chances, and I make them."

Change was a theme as well for Piercy, who was the 3M Open's first-round leader on its first day in 2019 after he shot a tournament-record 62 that hasn't been surpassed.

Seeking to shake up his season and reach the FedEx Cup playoffs, Piercy added a new swing coach, caddie, putter and driver all in the past two weeks. All of it helped summon that morning 65 on a day when the scores and gusting winds both went higher in the afternoon.

BLAINE, Minn. — The 3M Open, in its first three summers as a PGA Tour event, produced two of the longest-driving winners you'll find.

The names they’re getting are names.

And John Daly, who won The Open Championship ...Read More

BLAINE, Minn. — With weekend forecasts calling for hot and humid weather, will the fourth 3M Open in Blaine bring out the Fargo or the Fort Worth in almost one of Minnesota's own?

Raised in North Dakota and educated at ...Read More

The premise is wrong. The 3M Open isn't lessened because "big names'' aren't playing in Blaine this week because of the LIV Golf Tour. The 3M should be glad to be rid of them.

The very notion that modern golfers not named...Read More