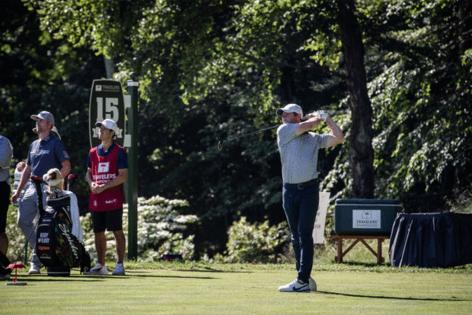 CROMWELL, Conn. — Crowds surrounded the ninth green at TPC River Highlands as the groups that had teed off in the morning of Thursday’s opening round at the Travelers Championship were nearing completion. The quiet was soon to be shattered by a thrilling roar from the nearby seventh green.

That’s where world No. 2 Rory McIlroy was, and he had just sunk a 47-foot putt for birdie in front of the hundreds who had followed him religiously from one shot to the next.

That shot gave McIlroy his seventh of eight birdies on the day, helping him to an 8-under-par 62 and the co-lead with little-known J.T. Poston, the 162nd player in the world.

“Any time you start with a 62, you’re going to take it. I feel like the start I got off to was sort of slow in a way. I birdied the two holes on the back nine that you should, 13 and 15, and then made a nice one on 18 to turn in 3-under par,” McIlroy, who started from No. 10, said. “Then once I got going on the front side there, that’s when I started to really feel it and started to hole some putts and hit some quality shots.”

Poston also started his round on the 10th hole and recorded six birdies on the back nine to post a 29, creating a buzz that stirred memories of Jim Furyk’s record-setting 58 shot in the final round here in 2016. But by the time he got around to the front nine the wind began to pick up and the 29-year-old from Georgia cooled some, but still finished strong with birdies on two of the final three holes to tie McIlroy. He closed his round by draining a 16-footer for birdie on No. 9.

Xander Schauffele, the No. 15-ranked player in the world, was in a tie for third with Martin Laird at 7-under 63. World No. 6 Patrick Cantlay finished at 6-under and was tied with Webb Simpson and Charles Howell III, two shots off the lead.

“It’s what you expect. If it’s not too windy and the greens are soft with that rain from last night, you expect a few guys to shoot [low scores],” Schauffele said. “We’ve been out here and we’ve played courses that are twice as long as this one and guys are shooting 30-under for the week. For some reason, I don’t know if it’s me, but I just feel like I expect everyone to shoot super low.”

The 6,852-yard, par 70 TPC River Highlands is known to drain exceptionally well but after rain soaked the course on Wednesday it became clear early that the course was in perfect condition with soft greens leading to some low scores.

“The greens are kind of perfect right now,” Laird said. “It doesn’t matter if it’s an 8-iron or sand wedge; they’re just hitting and stopping within a couple yards, and that makes a lot of the pins accessible that maybe sometimes around here when the greens get firm are not.”

Last year’s champion, Harris English, ended Thursday 4-under, while 2019 champion Chez Reavie tied for 16th at 3-under par. World No. 1 Scottie Scheffler was tied with Tony Finau, among others, at 2-under. All in contention going into Friday’s second round.

Simpson, who competed in the morning group, said, “This is a golf course where if the wind lays down a little, scores will be low.”

He was right. And the flip side, unfortunately for the afternoon groups which played as the wind picked up, meant the scores would be higher.

Poston’s caddie, Aaron Flener, picked grass from outside the tee area and tossed it into the air, reading the wind to combat it as much as possible. As other members of Poston’s group struggled, he was able to land on the fairway consistently and capitalize with his irons.

“I gave myself a lot of really good looks (with the irons),” Poston said. “I putted really well, too. I made a lot of putts that were in that 10-feet-and-in range when I gave myself that look. It just kind of all came together.”

On Friday, the tee times will flip — Thursday’s morning group will tee in the afternoon and vice versa.

“I think it’s easy to get caught up, myself at least, in the score that I’m shooting today, wanting to shoot 3-, 4-under every day,” Poston said. “Just trying to get in that mentality where I don’t force it too much, especially early on in the week and kind of let it come to me a little bit.”

KANSAS CITY, Mo. — Jake Falcon, the owner of a Kansas City-area amateur golf tour, decided this year that he would give away a one-year car lease to any golfer who made a hole-in-one.