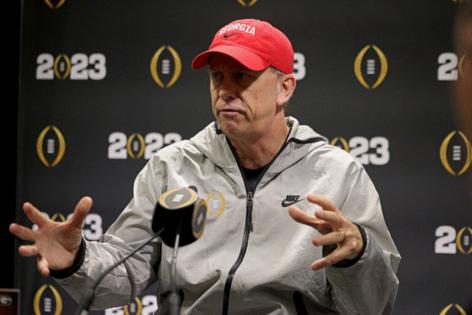 The chances of that happening are higher than ever, if only because of the math.

There will be at least 13 NFL offensive coordinators hired in the current cycle. More openings will be created if current OCs fill any of the five available NFL head coach positions. The Patriots on Tuesday hired ex-Alabama offensive coordinator Bill O’Brien to run their offense. That leaves 12 other teams that are either looking for a new coordinator or a head coach who ultimately will hire one.

The chances are good that more than one of those teams is considering Monken. One of them apparently has decided it wants him. NFL Network recently reported that Monken is Tampa Bay’s top target for its open position. Monken was the Bucs’ OC from 2016-18, then was out of a job when head coach Dirk Koetter was fired.

Monken’s misfortune was Georgia’s good luck. He’s probably the best play-caller in college football. Monken transformed the Bulldogs into a spread offense while maintaining Smart’s beloved “man ball” characteristics. Monken overcame his admitted initial skepticism about Bennett’s ability and built the offense around his many strengths.

If Monken leaves for the NFL, Georgia’s reputation and pay scale mean the Bulldogs will pick his replacement from a large candidate pool. Mike Bobo already is on staff as an analyst. He’s been coordinator at three SEC schools, including Georgia under Mark Richt.

But it’s been a long time since Bobo ran a high-scoring offense. We already know what Monken can do as Georgia’s play-caller. The results have been spectacular. Monken helped Smart revive his stale offensive approach and catch up with rivals who’d left the Bulldogs behind.

Monken can afford to be picky with his next job. He’s college football’s highest-paid assistant at $2.1 million per year through 2024. Monken probably could negotiate another pay bump with UGA if he stays.

Before the Chick-fil-A Peach Bowl, Monken said he’s happy at Georgia because he wants to win and likes working for Smart. But he added that he likes the money and would “never say never” to other opportunities. NFL teams will come knocking with big cash in hand, and Monken wouldn’t owe UGA any money if he takes an NFL coordinator job.

PHILADELPHIA — The Eagles lost two games without their starting quarterback, then plodded to a win in the season finale against the Giants’ backups. They saw themselves drop to the No. 4 favorite to win Super Bowl LVII...Read More

Been watching these 49ers lately, thinking that they look awfully reminiscent of something.

Reminiscent of a team that came from the same division nine years earlier and completed what may be the most celebrated season in...Read More