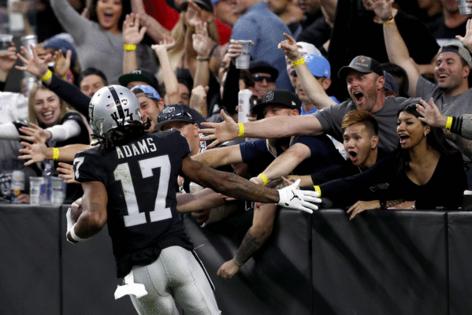 The Raiders got big contributions from their offseason acquisitions and overcame another slow start to win their third straight game.

Wide receiver Davante Adams had another big game, and defensive end Chandler Jones was the force the Raiders envisioned when they signed him as a free agent.

The Raiders quickly erased a 13-10 halftime deficit when Derek Carr found Adams for a 31-yard touchdown on the first play after a Chargers turnover. Another long touchdown from Carr to Adams on a flea-flicker on the next series gave the Raiders a lead they wouldn’t relinquish.

Justin Herbert’s pass to DeAndre Carter on fourth down with 2:48 to play fell incomplete for the Chargers, and a desperation drive reached midfield before time expired.

The Raiders have a short week to prepare for a Thursday night road game against the Rams.

2. Adams does it again

Adams continues to rewrite his own record book on a weekly basis.

He finished another monster game with eight catches for 177 yards and two touchdowns, threatening his career-high of 206 yards.