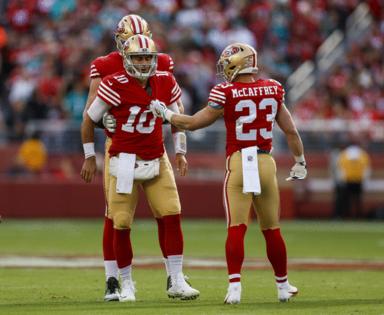 Some 2 ½ months after the 49ers lost Trey Lance to a fractured ankle in the home opener, Garoppolo injured his left foot battling on a third-down sack Sunday, all of which left Sunday’s game and perhaps many more in the hands of rookie quarterback Brock Purdy.

The 49ers (8-4) are not a quarterback-reliant team, even if their franchise lore says otherwise. Defense dictates the direction of this year’s team, with the help of offensive stars Deebo Samuel and Christian McCaffrey to come through in timely fashion.

The Dolphins (8-4) committed four turnovers, including a pair in the final minutes to seal their fate. Nick Bosa’s third sack of the game — he took the NFL lead with 14 1/2 this season — forced a Tua Tagovailoa fumble that Dre Greenlaw recovered and returned 23 yards for the game’s final score. Fred Warner intercepted Miami backup Skylar Thompson to open the Dolphins’ final possession, with 1:42 to go.

Next up, the 49ers complete their three-game homestand next Sunday against Tom Brady and the Tampa Bay Buccaneers, who take a 5-6 record into Monday night’s home game against New Orleans.

All due respect to Purdy’s relief performance (25-of-37, 210 yards, two touchdowns, one interception), but the 49ers’ most crucial throw came with six minutes left. That’s when coach Kyle Shanahan chucked his challenge flag over 20 yards onto the field to rightfully contest a fourth-down conversion catch by the Dolphins’ Mike Gesicki at the 49ers’ 33-yard line. Greenlaw was there to help defend the pass to Gesicki near the Dolphins’ sideline.

Just like last Sunday’s 13-0 shutout win over the Saints, the 49ers tried salting away the final minutes of victory with running plays, including a 30-yard cutback effort by McCaffrey to the 11-yard line. The Dolphins’ third sack of Purdy and a George Kittle holding penalty backed things up for Robbie Gould, but he banged in his fourth field goal in four attempts Sunday, this final one from 48 yards with 2:03 to go.

McCaffrey had 146 yards from scrimmage (80 receiving, 66 rushing) and Samuel had 58 yards on six receptions to key the 49ers’ offense.

Tagovailoa finished 18-of-33 for 295 yards, two touchdowns and two interceptions, with Tyreek Hill catching nine balls for 146 yards and one touchdown.

In his most meaningful action as a pro, Purdy sometimes threw into tight windows with success, and sometimes he got wild, especially on third down. All in all, it was an acceptable effort from this past draft’s “Mr. Irrelevant” as the 262nd and final player selected (out of Iowa State).

The 49ers’ bid for a fifth straight game with a second-half shutout came to an end early in the fourth quarter, which opened with a 19-yard catch by Hill and then a 45-yard touchdown grab by Hill, who raced past Charvarius Ward’s one-on-one coverage.

Tua Tagovailoa had not thrown an interception in 193 passes before Jimmie Ward and Deommodore Lenoir snagged consecutive throws in the third quarter. The interceptions led to two Gould field goals, from 43 and 36 yards, to stake the 49ers to a 23-10 lead entering the fourth quarter.

Ten seconds into the game, the 49ers were down 7-0, having allowed former 49er Trent Sherfield to zip through their defense for a 75-yard catch-and-run touchdown on Tua Tagovailoa’s quick strike. Safety Tashaun Gipson Sr. was one of several defenders caught out of place, as Sherfield sped past linebackers Fred Warner and Azeez Al-Shaair, and safety Talanoa Hufanga.

Nick Bosa notched a pair of third-down sacks before halftime to go with that game-sealing strip-sack. While that 49ers’ defensive line welcomed Arik Armstead back after a seven-game absence, it lost defensive tackle Hassan Ridgeway to a pectoral injury in the fourth quarter.