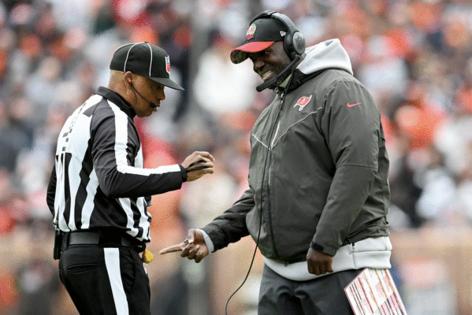 TAMPA, Fla. — When it comes to plotting offensive strategy and formulating a game plan, there is a fine line between recognizing your weaknesses and running scared.

And the Bucs, you might have noticed, were last seen cowering in Cleveland.

This, my friends, is what a crisis of faith looks like.

How else are we to interpret what we saw — and the explanations we later heard — after Sunday’s overtime disaster against the Browns?

Now, to be fair, there are legitimate reasons for reticence when it comes to trusting this offensive unit. Tampa Bay, after all, has taken a 40-percent cut in scoring from 2021 to 2022.

The offensive line was remade in the offseason, dinged in the preseason and is now pretty much decimated with Tristan Wirfs’ ankle injury. The offense also lost its greatest mismatch (Rob Gronkowski) along with its mastermind (Bruce Arians), and the unit’s average age can be measured in gray follicles.

But acknowledging shortcomings doesn’t mean you need to wave a white flag.

You just need to find a workaround. You need more imagination. Mostly, you need to give defenses something to worry about. And the Bucs have failed miserably in that sense.