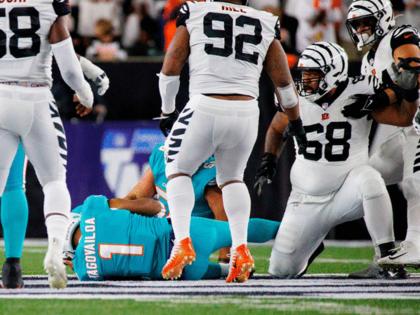 Miami Dolphins coach Mike McDaniel repeatedly said there is no timetable for Tua Tagovailoa’s return on Friday after his quarterback suffered a concussion in Thursday night’s loss at the Cincinnati Bengals.

His thoughts are certainly more with Tagovailoa’s personal health than how quickly he can get game ready.

But Dolphins fans — and Tagovailoa himself, as he noted in his statement released Friday night — are eager to know when he might be able to return to action.

The reason there is no said timetable, though, is because of exactly that: There is no set timetable for concussion recovery. Different athletes respond differently to concussions. Many take several weeks and even a month to get back into a game. Contrarily, there is ample precedence for NFL players, quarterbacks included, not even missing the following week’s game.

The only other Dolphin to experience a concussion this season, tight end Cethan Carter, has not yet returned to practice since first getting concussed in the Sept. 11 opener against New England Patriots. There were differences in the blows to the head, of course. Carter’s occurred on a kickoff collision. Tagovailoa was spun and driven to the ground on a sack, causing the back of his head to hit the turf from the whiplash.

Tagovailoa’s concussion has also come under significant controversy. Many on the outside speculate Tagovailoa sustained a concussion four days earlier in the Sept. 25 win over the Buffalo Bills. The quarterback similarly hit the back of his head against the ground but after a push. He grabbed at his head, shook it as if to shake the cobwebs and stumbled after getting up. He was evaluated for a head injury and cleared to return for the second half in concussion protocol. Tagovailoa and McDaniel said postgame it was a back injury that caused him to appear woozy.

The NFL Players Association, which is investigating Tagovailoa’s clearance, terminated the unaffiliated neurotrauma consultant involved in clearing Tagovailoa in the Week 3 game against Buffalo. The union also said, in a joint statement with the league, that no conclusions about medical errors or protocol violations have been made. The statement also said the league and union agree modifications need to be made to the concussion protocol.

Tagovailoa has had his tests come back clean — X-rays and CT scans, plus his Friday MRI, according to NFL Network — since being released from University of Cincinnati medical facilities and traveling back to South Florida with the team after the Thursday night game, although he was still dealing with headaches when McDaniel last updated his situation on Friday. Tagovailoa remains in concussion protocol.

The protocol has five steps to return to participation after being diagnosed with a concussion:

The first phase, symptom-limited activity: The player is prescribed rest, limiting or, if necessary, avoiding activities (both physical and cognitive) which increase or aggravate symptoms. Under athletic training staff supervision, limited stretching and balance training can be introduced, progressing to light aerobic exercise, all as tolerated.”