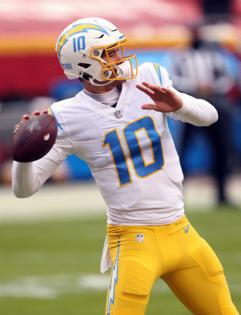 But, just a few minutes later, Herbert rolled to his right on third and one and, with room to run for the first down, instead gingerly and feebly tossed the ball into the Arrowhead Stadium turf to kill the play.

“It didn’t look like a real injury because he landed on his butt,” Allen said Thursday of the moment Herbert suffered fractured rib cartilage last week against Kansas City.

But then recalling the throwaway on third down, Allen said he concluded, “OK, he must have a real problem. He’s hurting. He’s hurting for sure.”

Allen was, indeed, like a lot of this team’s fans a week ago. He watched Chargers-Chiefs on television at home after not traveling because he had been ruled out because of a hamstring injury.

So Allen sat in amazement too, when Herbert immediately followed the most anemic-looking play of his young NFL career with one of the most dazzling.

Herbert perfectly dropped a rainbow deep over the middle into the waiting hands of DeAndre Carter to convert a fourth and one with a 35-yard gain.

From not being able to go at all to going long, Herbert put the Chargers in position to pull to within 27-24 in the last two minutes.

“It would have been an amazing throw even if he wasn’t injured,” Allen said. “But the fact he was able to do it with the game on the line and everything that was going on made it much more magnified.”

Everything around Herbert has remained magnified this week as he tries to ready himself to play Sunday against Jacksonville at SoFi Stadium.