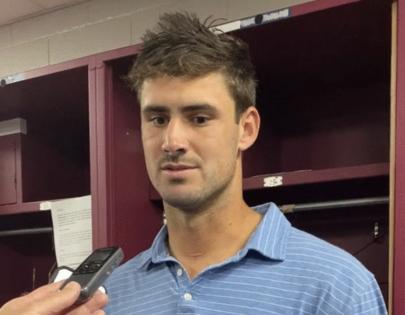 Giants quarterback Daniel Jones revealed on Thursday that he underwent a “non-football related procedure” on his neck “early in the winter.”

Jones said the previously undisclosed surgery was “completely unrelated” to the “neck strain” that prematurely ended his 2021 NFL season after a Week 12 injury in Philadelphia.

A small scar at the bottom of Jones’ neck, in a photo circulated on social media, prompted a question about whether he’d had surgery to correct last season’s injury.

“No, I didn’t. I didn’t at all,” he said. “I had a non-football related procedure done on my neck. I saw there was some [speculation] about it [online]. But it was completely unrelated. I feel good. Neck’s great.”

Jones added that the surgery happened “early in the winter” and reiterated that it was “unrelated” to last season’s injury. The press conference was cut off at that point, and he took no more questions on the topic.

It’s unheard of nowadays for an NFL team to successfully keep a surgery to its starting quarterback under wraps. This story isn’t over, though.

Understanding the exact nature of the procedure is important. Any potential health issue that required surgery on Jones’ neck is relevant, if not possibly concerning.

Special teams coordinator Thomas McGaughey said Kadarius Toney isn’t in the mix for kick or punt returners at the moment because he isn’t on the field.

“Well, he hasn’t done a lot of anything right now,” McGaughey said. “As soon as he gets back on the field, he’ll be pushed right back into the mix. It’s just a matter of him getting healed up and get to where he can just function as a football player.”