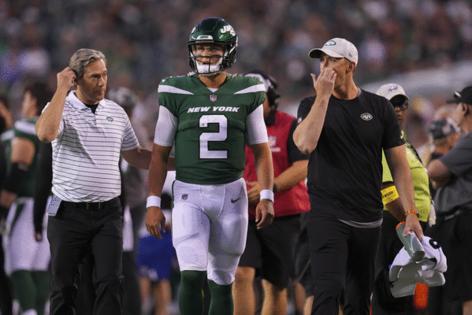 The timeline for Wilson’s return from the meniscus tear he suffered in last Friday’s preseason opener against the Philadelphia Eagles has been listed as anywhere from two to four weeks. What complicates Wilson’s recovery is he is also dealing with a bone bruise. Jets coach Robert Saleh didn’t show his hand when asked if Wilson or backup Joe Flacco would start against the Baltimore Ravens at MetLife Stadium on Sept. 11.

“If Zach is ready to go, he’s going be the Week 1 starter,” Saleh said Thursday of his second-year QB. “If he’s not, then Joe will. We are going to take it by how Zach looks, how he feels, how he moves and what the doctors tell us.

“Whenever that moment is, that’s when he will step on the field.”

Wilson flew back from Los Angeles where he had the surgery Tuesday. He was at the Jets facility on Thursday and was already walking around the facility as the team said he was in good spirits.

While Wilson is recovering, Flacco has taken over the first-team snaps in practice. Flacco, 37, who did not play against the Eagles during the first preseason game, is expected to start in the final two warm-up games against the Atlanta Falcons and Giants.

Whoever starts against the Ravens to kick off the ‘22 campaign, Saleh said the Jets are confident in both of their abilities under center.

“It is really going to be dictated on how he feels and when he’s ready to go,” Saleh said about Wilson. “We are going to make sure we do right by him in terms of making sure he’s 100 percent healthy. Whenever that is, that’s when he will hit the field.”