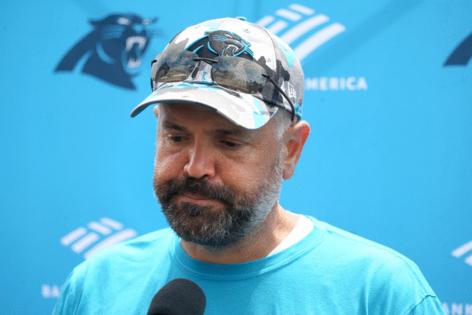 But Rhule knows a taunt when he sees one, and so he was critical of his backup safety Kenny Robinson for triggering another brawl with the Patriots by taunting the injured Wilkerson as he lay motionless on the ground.

“I didn’t see the hit, but I could see him standing over the player,” Rhule said of Robinson following practice. “That’s not how we want to practice.”

He continued: “Things happen in football. There was some good clean hits, but we don’t stand over somebody and taunt him.”

Robinson was also involved in the Day 1 skirmishes, when Panthers defensive backs provoked Wilkerson on their own sideline. Robinson sparked Round 2 by blowing up Wilkerson during a kickoff drill. His hit was clean, according to several Patriots, but Robinson’s celebration crossed a line.

Might there be additional discipline for Robinson, who got tossed both days of the joint practices?

“Two days of practice now affected by a guy . . . we’ll have to talk about it,” said Rhule, who told Robinson to leave the field after witnessing the taunt.

The Panthers head coach said it was unfortunate that “a day of such good football” was spoiled by the melees.

The Patriots and Panthers will kick off in a preseason game on Friday at 7 p.m.