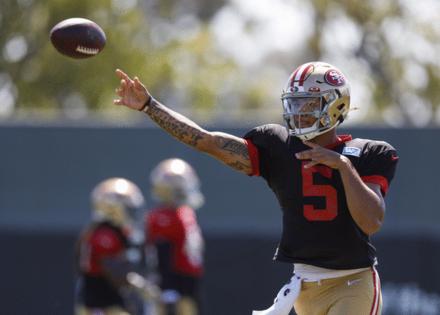 The 49ers are in Minnesota this week for two joint practices with the Vikings. A few hours from Trey Lance’s hometown of Marshall, the 49ers quarterback will have the biggest scimmages of his football life.

Niners coach Kyle Shanahan has made no secret of his disdain for preseason games. He manifests this dislike in his vanilla tactics and limited rosters.

If he had it his way, the Niners wouldn’t play preseason games. They would only do joint practices with other teams.

He likes joint practices because it’s competitive but much more controlled than a game, even an exhibition.

He likes them because you can’t hit the quarterbacks, but you can use the whole playbook.

He likes them because when he goes deep into that playbook, trying something he might want to use in a game down the line, only one other team has it on film — not the whole league.

These are the practices where Lance will prove just how ready he is for the season. The second-year quarterback is the starter — there’s no questioning that — but will he be asked to game manage all season or will Shanahan feel comfortable enough with Lance to let it rip in Chicago in Week 1?