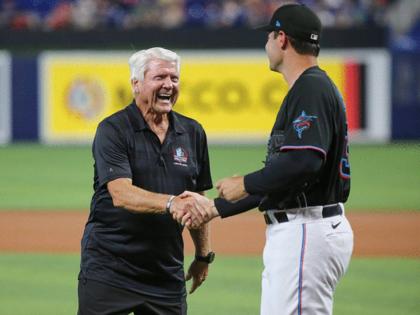 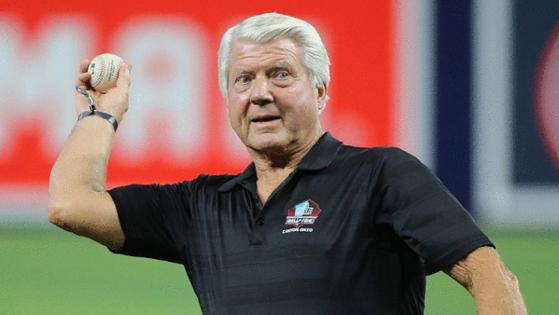 MIAMI — Jimmy Johnson is a Hall of Fame football coach. He won the National Championship with the University of Miami in 1987 and won the Super Bowl twice with the Dallas Cowboys before coaching the Miami Dolphins for four seasons from 1996-1999.

He’s been part of big moments, including ones where he was Saturday.

“My biggest concern today,” Johnson said, “is if I can get the ball to home plate.”

Johnson, who turned 79 last month, threw out the ceremonial first pitch prior to the Miami Marlins’ first game of a doubleheader against the Atlanta Braves at loanDepot park — which is located at the site of the former Orange Bowl where Johnson roamed the sidelines while with the Hurricanes from 1984-1988.

How did he prepare for the moment?

“I walk every morning,” Johnson said, “and the last couple of mornings, I picked up a rock about the weight of a baseball and I’m throwing the rock to see if I could make it to home plate, which is going to be debatable. I’ve got a fused wrist. I’m 79 years old. So the last two mornings, I’ve picked up a rock and threw it because I’ve seen some of these crazy pitches.”

Johnson got the ball to home plate on Saturday, albeit outside of the strike zone with Marlins relief pitcher Richard Bleier catching.

Prior to his first pitch, Johnson spoke with the Miami Herald for a wide-ranging interview. Here are the highlights.

On the day at the ballpark

— Miami Herald: So, this place looks a little bit different than it did during your coaching days...