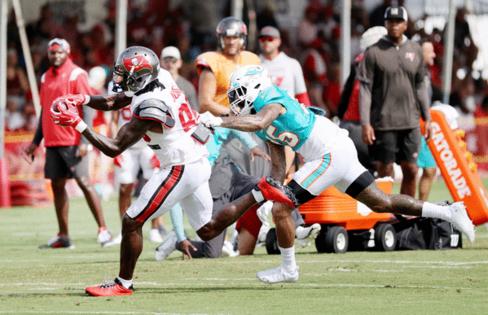 TAMPA, Fla. — When the question was pitched his way, the tailback didn’t stutter step. Leonard Fournette went straight ahead, and a fan base found daylight in his response.

So who out there really seems to be picking things up?

“Julio (Jones), definitely,” Fournette said with no hesitation. “You see a guy of his stature, how big and fast he runs and how he gets open, and you see why he is where he is at in the league.”

A little cool-your-jets disclaimer: Jones, slowed by injuries the last two seasons, hasn’t yet embarked on a career resurgence at age 33. It only seems that way, through two uplifting weeks of Bucs training camp.

“He’s been more than I expected, to be honest,” general manager Jason Licht told radio station WDAE on Thursday.

Every practice seems to send social media into a froth. During Wednesday’s joint practice with the Dolphins, Jones’ outstretched snag of a Tom Brady deep ball — over cornerback Noah Igbinoghene — during 7-on-7 action was deemed the “Play of the Day” on the Bucs’ official Twitter account.

“Obviously not being with the team in the offseason, he’s still got to get in a little better shape, but we like what we see in him. He’s explosive, very smart, understands the game and he can help us.”

Then, imagine plugging the seven-time Pro Bowler into a rotation where he doesn’t necessarily have to be the No. 1 guy.

Think Antonio Brown in this system, circa 2020. Difference is, Brown (45 catches, 483 yards in eight regular-season games) didn’t sign until late October of that season. Jones, the NFL’s active leader in receiving yardage (13,330) signed the first day of training camp.

“Everything’s coming to me,” Jones said Thursday, when he was given a veteran’s day off and observed the second joint practice with Miami in a bucket hat. “The game of football, you just don’t want to have to go out there and think. You want it to become second nature to you. But I’m picking it up fairly quickly, and it’s been good.”

Limited to 19 total games by hamstring issues the past two seasons, Jones isn’t expected to play in Saturday’s preseason opener against the Dolphins. He also likely won’t get a rep in Game 2 at Tennessee, though he’s sure to participate in next week’s joint workouts with the Titans, who released him in March after one injury-besieged season (31 catches in 10 games).

The past two years seem to have fostered patience and prudence, in terms of dealing with physical setbacks.

And when a total grasp of the offense converges with good health, the Bucs might — might — have a comeback player of the year candidate on their roster.

“He brings physicality, he brings everything,” safety Mike Edwards said. “He’s got the routes, the speed, everything.”

I know, that is a silly question in some ways. The Steelers have played three games. It is a long season. A lot can change in the next 14 games.

But have you watched the ...Read More