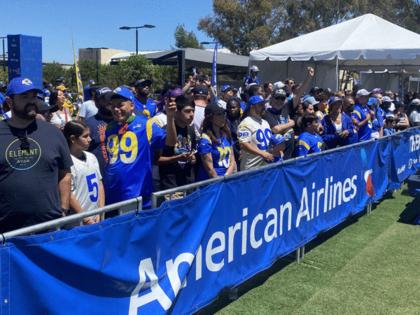 LOS ANGELES — Six years ago, upon their return to Los Angeles after a two-decade absence, the stands at UC Irvine for Rams training camp were a sea of other NFL teams' jerseys. The Green Bay Packers, Dallas Cowboys, then-Oakland Raiders and San Francisco 49ers seemed omnipresent.

The Super Bowl effect was in full effect during Rams training camp, which concluded Wednesday.

"We talked so much about it in the weeks leading up to the Super Bowl: What playing the Super Bowl in Los Angeles would do. What a win would do," said Kevin Demoff, the Rams chief operating officer. "I don't think you can underestimate it."

Robert Gonzalez of Culver City was among those celebrating the surge.

At a practice last week, Gonzalez held up a large, printed cutout of Kupp's face with a crown atop his head. Kupp won the so-called Triple Crown by leading the NFL in receptions, yards receiving and touchdown catches.

After the Super Bowl victory, Gonzalez said he asked his boss at a sign company if he could purchase materials to make a few signs that featured Kupp, Donald and the Super Bowl trophy. He took them to the Rams' victory parade, and coach Sean McVay and players acknowledged him as they passed by on buses.

"Made my heaven day," Gonzalez said.

In 2016, Gonzalez made friendly attempts to convert Cowboys fans who attended Rams training camp and games at the Coliseum. He knew it might take a while.