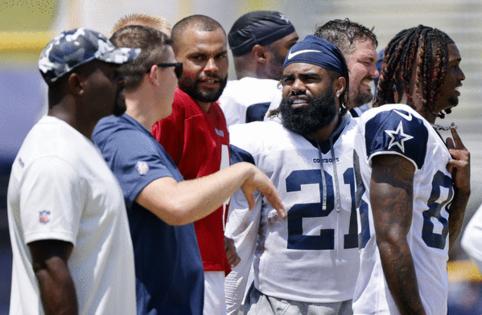 They will not play in Saturday’s preseason opener, which will be reserved for the young players on the team.

Coach Mike McCarthy believes they can get more quality work done in practice with starters than they would by playing them for a series or two in the preseason, as they did in the past.

With just three preseason games, McCarthy said the work in the joint practices will take precedence. Teams played four preseason games prior to 2021.

After the trip to Denver, the Cowboys have two joint practices next week against the Los Angeles Chargers before their preseason game in Los Angeles, Aug. 20. And the plan will be the same. The starters will only work in the practices.

“It doesn’t make a lot of sense to give a group of guys one series,” McCarthy said. “I’ve had two Hall of Fame veteran quarterbacks throw a touchdown on a first play and we’d laugh about it. No matter what you called the ball was going down the field just to get their one series out of the way. So, I’m not a fan of that.

“It would be the same with Dak, it’s not how much he plays, it’s who he plays with. That’s why I like what we’re trying this year is we’re going to get in a little safer environment. We’ll get those reps because if you have a 16-play team period. It just gives us a chance to make sure these guys compete against the other team in terms of play time. And we’ll see how it goes.”

Look for the Cowboys to head into practice against the Broncos with a little extra juice.

They haven’t forgotten the 30-16 blowout loss to Denver in 2021, ending a six-game winning streak and sending their season into a tailspin.

After starting the season 6-1, the Cowboys lost three of the next four with the Broncos’ allegedly putting out a blueprint for the league on how to slow down the Cowboys’ high-powered offense.

Diontae Johnson had another pass hit off his hands and it turned into an interception Sunday, but he certainly didn't drop the ball when asked about what is ailing the Steelers.

"Obviously, it's a rebuilding year," he ...Read More